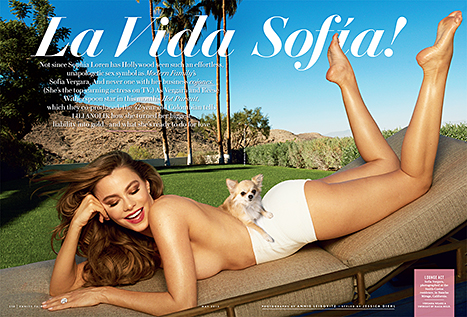 –Sofia Vergara’s Vanity Fair spread is predictably sultry  and booberrific, but there’s something charming about the way she casually mentions in the interview that she issued a press release about her last breakup.

-Also, Sofia and Reese Witherspoon talk about their new movie and how seriously Reese takes herself in this interview.

-We saw Anne Hathaway challenge Emily Blunt to a Lip Sync Battle with “Wrecking Ball,” and now Emily is striking back with her rendition of “No Diggity.”

-Watching Ryan Gosling blush after getting a text in the middle of an interview released my inner squee monster.

–Gosling admits that keeping a dream journal is “kooky” but he still asked his Lost River actors to do it.

-Also, The Gos says Hollywood is just like high school. (Although his high school was on a boat so I don’t think we can trust his judgement.)

–Josh Gad sang his way through James Corden‘s opening monologue to the tune of Frozen songs.

–Justin Bieber hugged Ariana Grande onstage, and Big Sean was having NONE of it.

-Netflix is overloading us with great trailers today. Here’s the first for Grace and Frankie, starring Jane Fonda and Lily Tomlin as two women whose husbands (played by Martin Sheen and Sam Waterston, respectively) leave their wives for each other.

-Has Nicholas Hoult moved on from Jennifer Lawrence to Dianna Agron? Looks-wise, he certainly has a type, no?

–Jon Hamm‘s rep is shutting down In Touch’s story about him and Jennifer Westfeldt splitting.

-I’m not a UK citizen, but I still want to vote for Maise Williams for prime minster.

–Ryan Reynolds continues to make me warm to the idea of a Deadpool movie, one inappropriate tweet at a time.

-Marvel is prepping an SHIELD spinoff, which surprises me because its ratings and critical reception are so very “meh” — and it also makes me nervous about Agent Carter’s survival chances (which EW optimistically says is hovering “around 60%“).

-Speaking of EW, screw them for this CW-bashing review of Daredevil. (The print version was so much worse.)

–Chris Pratt hearts raptors. He advocates for dinosaur rights in the first clip from Jurassic World. Is this supposed to be so, um, cheesy?