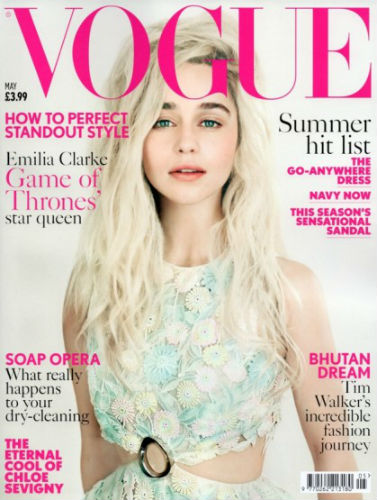 -Game of Thrones star Emilia Clarke deserves a way better cover than what Vogue UK just saddled her with.

-Meanwhile, her costar Kit Harington plans to “be a good little hunk and shut up.” Good boy.

-This is incredibly sweet: Blake Lively made all three of her Sisterhood of the Travelling Pants castmates godmothers to baby James.

–Jay Z shared footage from his wedding to Beyonce in honor of their 7th anniversary.

-I ended up working stupid late last night and had the TV on in the background, which meant I caught all of Madonna‘s appearance on Fallon. What I learned: she lives in fear of her kids calling her “basic,” she once accidentally asked her 13-year-old son Rocco if he had any friends she could date, she’s super terrible at standup comedy, and her toy instrument rendition of “Holiday” is wonderful.

–Kanye West covers the new issue of T magazine, where he informs us that we’re all living in A.Y. — After Yeezy. Okaaaaaaay.

-I love that every entertainment site I visit seems to be hate-recapping CSI: Cyber.

–Karl Lagerfeld turned down a part in Zoolander 2 because he thought it was a “silly” stunt.

–Alyssa Milano’s breast milk was confiscated at Heathrow Airport and she’s not happy about it.

-Listening to Sandra Bullock’s 911 call about a stalker in her house makes me want to install a panic room.

–Gwyneth Paltrow is going to live on food stamps for one week. Artisanal, farm-to-table food stamps.

-Guess I wasn’t the only one who wasn’t super impressed by yesterday’s Jurassic World clip. Joss Whedon called it out for being “70s era sexist.”

-Ruh roh. As a frat boy, Jon Hamm allegedly used the claw of a hammer to drag a pledge around by the balls.

-This is probably the most realistic summary of TV shows’ renewal chances I’ve seen yet.

–Harvey Weinstein will not face criminal charges for allegedly groping a model because Hollywood.

-Need one last soul-crushing experience before this week is over? Here’s a new Entourage movie trailer.

-Disney dropped a new featurette for Tomorrowland. Sigh. I wish George Clooney could narrate my life.