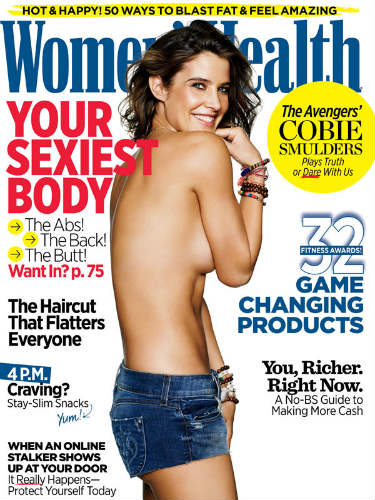 -Bless Cobie Smulders. In her Women’s Health cover story, she revealed that she’s recovering from ovarian cancer — and she was working on HIMYM throughout the whole ordeal.

–Shonda Rhimes once again proved she will not tolerate any shit from her actors. After telling the Hollywood Reporter a few months ago that she has a “no Heigls” rule on set, she dropped a major player from Grey’s Anatomy last night — in a totally brutal way. The departure comes after lots of whispers that said actor has become pretty insufferable, and his EW exit interview makes it pretty clear that it wasn’t his decision to leave the show. (Too bad a bunch of EW subscribers received their print edition early this week and read the interview before the show even aired.)

-If three-year-old Blue Ivy really forms sentences like ‘Oh, ya’ll look beautiful. When are ya’ll getting married?’, I may start building a shrine.

–Joss Whedon‘s comments on how he put a lot of thought into avoiding scenes of thoughtless mass destruction a la Man of Steel when shooting Avengers: Age of Ultron is promising.

–Mark Ruffalo and Scarlett Johansson could give Chris Evans and Jeremy Renner some tips on how to handle sexist questions during the Avengers junket.

–Carey Mulligan‘s singing can bring a party to a halt— but in a good way!

–Gillian Anderson can do so, so much better than Chris Martin. What would he even do with a BAMF like her?

–Ben Affleck is chilling in Cape Breton, for some reason.

-Oh, how I wish with my whole being that this story about Leonardo DiCaprio’s Tinder profile is true!

-I might have spent way, way too much brainpower deciding how to vote in Buzzfeed’s “Who Was the Best TV High School Boyfriend?” poll…

-This comprehensive list of everything Karl Lagerfeld hates made my week.

-Even Benedict Cumberbatch can’t make me want to watch a balding Johnny Depp.