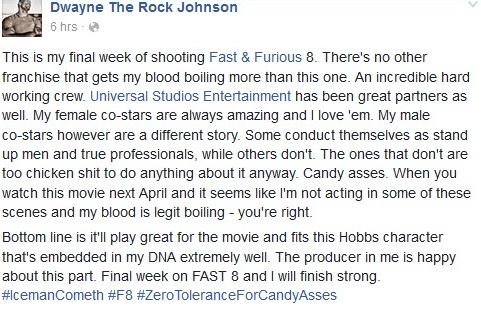 -The Rock posted a blind item on Instagram that  put everyone on the internet in instant detective mode last night. The majority of people immediately assumed he was talking about his new costar Scott Eastwood, but I’m not so sure. His opening comment about how “no other franchise gets my blood boiling more than this one” makes me think it’s one of his longtime costars. Plus he uses “candy ass,” his signature phrase which Eastwood also referenced in his douchey Esquire interview. Also, The Rock has tweeted nice things about him in the past. ONTD’s sleuthers have narrowed it down to Vin (noooo!!!) or Tyrese (more likely).

-Here’s more about Seth Rogen‘s comments on Katherine Heigl. He’s waiting for a personal apology?! Look, it was not her smartest career move but the movie had already come out and if you look at what she actually said about Knocked Up… she’s not wrong. I liked that movie but damn if the women weren’t all depicted as shrews. And her comment wasn’t directed at him, so for him to still be butthurt about it stumps me. Also, The Rock is being celebrated for his post and that movie that hasn’t even been released yet. (And he *should* be celebrated for it! His post was awesome!) But the difference between how actresses and actors are allowed to be critical is glaring.

–Tom Hiddleston is now on Instagram but weirdly, there’s no overly staged romantic photos yet. He’s doing it wrong!

-TIFF’s announcements continue to impress. Brie Larson, a Kaiju-fied Anne Hathaway and the Blair Witch Project are all coming to Midnight Madness.

–Julianne Moore is starring in a new TV series with Robert De Niro that’s being developed by David O. Russell and I already want to enclose her in protective bubble wrap.

–Taran Killam has been let go on SNL and this interview about it is kind of heartbreaking.

-This is amazing: thanks to Mo Ryan‘s piece in Variety last year about the lack of diversity on TV, FX’s John Landgraf took his network from 12% women and people of color directors in 2015 to 51% in 2016.

-It might turn out to be terrible, but this Prison Break revival clip has me all tingly.

-Speaking of dubious revivals, a year ago this tweet from David Duchovny to Gillian Anderson would have made me squeal. Now? Not so much.

-We are officially on Bon Iver album watch. Don’t do me like Frank Ocean, Bon!

-The first trailer for Marvel’s next Netflix show Luke Cage shows his one weak spot. (Sadly, it’s not me.)

Charlie Hunnam and His Sword