In response to allegations of bullying made by palace aides to The Times, a spokesperson for the Duke and Duchess of Sussex says: https://t.co/tycXEGInll pic.twitter.com/cEuPHQrpXl

-My god, how much does the palace and/or the British press hate Meghan Markle? Or at the very least, are terrified of her? In a very transparent attempt to undercut this weekend’s Oprah interview, there’s a new, flimsily detailed smear story in the Times about her “bullying” the royal staff. And in a highly unusual move, Buckingham Palace just released a statement that they will investigate the claims because they will not “tolerate bullying.” That’s rich.

-The story also makes a big deal of her earring choice, but this thread reveals how she was clearly set up. My god, no wonder Harry wanted to get her away from there.

-Of course, the palace could spend all this energy looking into the allegations surrounding Prince Andrew instead, but they’re all “nah.”

-Meanwhile, Meghan‘s camp released a statement: “It’s no coincidence that distorted several-year-old accusations aimed at undermining the duchess are being briefed to the British media shortly before she and the duke are due to speak openly and honestly about their experience of recent years.”

-Bets are being made about the new baby’s name, with “Diana” leading the way with 10/1 odds.

-The Golden Globes have come and gone, but the LA Times is still going after them. They just reported that HFPA members voted not to hire a diversity consultant last summer.

–Regé-Jean Page is gonna be in a movie with Ryan Gosling and Chris Evans?! Just take my money already.

-In weirder casting news, Joseph Gordon-Levitt will play Jiminy Cricket, and Cynthia Erivo a Blue Fairy in a live-action Pinocchio.

-The Hollywood Reporter keeps tweeting out clips from their actors roundtable and the clips with Ben Affleck have an energy that worries me.

-Though apparently he’s doing well and working with George Clooney.

-Comedian Chris D’Elia is being sued by a woman who says he sought pictures and sex from her when she was 17. He’s accused of soliciting more than 100 sexually explicit photos and videos. He denies the claims.

–Alec Baldwin needs to keep Gillian Anderson’s name out of his mouth.

–Camila Cabello launched an initiative to provide grants to ten BIPOC, LGBTQ+and youth-led organizations to cover six months’ worth of mental health support for their workers.

–Emo is having a moment — and it’s all because of TikTok.

-I’ve missed movies and theatres so, so much during this past year, and there’s only been two experiences that have made me feel like I was sitting in an audience again. The first was last fall’s David Byrne’s Utopia, and the second was the In & Of Itself, which just landing on Crave. It’s ostensibly a magic show (and yes, there are some card tricks and illusions) but it’s more an examination of identity and personal narratives. I sobbed — not because it was depressing but just because it was so incredibly profound and moving.

-Moxie, the new Amy Poehler–directed teen-feminist rom-com on Netflix, is getting lukewarm reviews.

–Melissa McCarthy and Octavia Spencer become superheroes in Netflix’s Thunder Force trailer. The “Kiss From a Rose” bit got me. Also, the fact that Bobby Cannavale and McCarthy keep making movies together makes me happy. 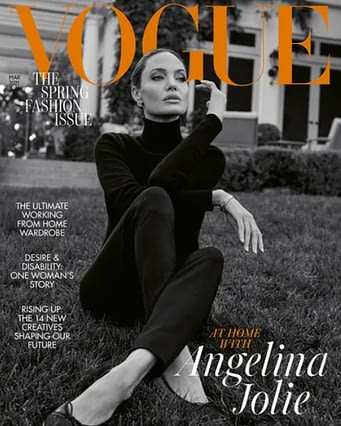 –Angelina Jolie covers the March issue Of British Vogue, and the interview is a good mix of hints about her split from Brad Pitt (“The past few years have been pretty hard. I’ve been focusing on healing our family. It’s slowly coming back, like the ice melting and the blood returning to my body”), passion about her activism (“I see a lot of older people making excuses for certain behaviours, and it tends to be the younger person who is quicker to say, ‘But this is simply wrong, and we stand against it'”) and cute anecdotes about her kids (“I feel that I’m gonna hit my stride in my fifties. Though we were on the trampoline the other day, and the children said, ‘No, Mom, don’t do that. You’ll hurt yourself.’ And I thought, ‘God, isn’t that funny?’ There was a day I was an action star”). The family photos are just as fascinating as the quotes — I love the one where she’s giving Maddox a haircut.

-Uh oh. A former costar of Adam Driver went on a Portuguese podcast and accused him of “behaving very badly” on the set of 2018’s The Man Who Killed Don Quixote. According to translations, she said “he demanded, I think by contract, that no one could look at him. If they looked, the extras were immediately fired.” She also said he got too rough with her during filming: “He behaved very badly with me. Physically. He attacked me… And it had nothing to do with the scene.”

-Starz announced today that it will remove Marilyn Manson from his upcoming appearance in its drama series American Gods.

–Dolly Parton turned down an offer to receive the Presidential Medal of Freedom twice during the Donald Trump administration — possibly because she had scheduling conflicts but I prefer to believe she’s just that good.

-Although she helped fund the vaccine research, she still hasn’t gotten the shot. “I’m not going to get mine until some more people get theirs. I don’t want it to look like I’m jumping the line just because I donated money.”

-I’ve been really enjoying the Too Long; Didn’t Watch podcast, in which a celeb watches the first and last episode of a series they’d never seen before and tries to figure out what they missed. Jon Hamm watched Gossip Girl, Alison Brie watched Game of Thrones, Kumail Nanjiani watched Veronica Mars, and this week Sophia Bush watches Parks and Rec.

–Mariah Carey‘s family continues to be garbage. Her sister is suing her for $1.25 million, alleging infliction of emotional distress.​

-The palace is refusing to take the blame for the birth certificate fiasco.

-Stars like Charli XCX and Rihanna are mourning the death of producer Sophie.

-This article on stressed-out COVID compliance officers and assistants who work on TV shows is terrifying. “I have no formal training. I have no medical training. I don’t know anything more or less about coronavirus than the next person.”

-I really liked this piece on Hannah Waddingham’s arc on Ted Lasso. It’s so rare to see such a fully realized character in a comedy, especially a woman over 40.

–Ariana Grande is releasing a deluxe album — and it’s got 4 different versions of “Positions.”

-Here’s the trailer for The Nevers, HBO’s Victorian sci-fi drama that Joss Whedon created — and then left. I must say I’m intrigued by this first look.

–Amy Poehler directs and co-stars in Moxie, playing a woman who inspires her teen daughter to start a rabble-rousing zine. It’s coming to Netflix next month.

–Drake’s wanders alone through his mansion in Toronto’s Bridle Path in his new video, which was shot during social distancing. His poor neighbors must be like “damn, there go the fireworks again.”

–Aaron Paul and Bryan Cranston are on the cover of Esquire Mexico to promote their tequila brand.

-Bless Tom Holland for getting a bunch of hot celebrities to do shirtless handstands on Instagram.

-Here’s a preview of Lindsay Lohan‘s new song, “I’m Back.”

–Harry Styles called into a radio show and talked about his time self-isolating with friends. “Well, I’m with people who have real jobs, so they’re working… which leaves me — someone with not a real job — doing kind of whatever. I’m reading a lot, doing a lot of writing, trying to exercise, trying to be outside. And then we kind of all get together in the evening and watch a film or something like that.”

-On last night’s Kimmel, Jennifer Aniston revealed that she is the only person in the world that is loving all the extra dishwashing that social distancing results in. “I might have acquired a new OCD kind of a situation. Not only do I clean constantly — dishes are my new favourite thing in the world cause not only are you doing your dishes, but you’re washing your hands a lot.” She and Jimmy also surprised a nurse who tested positive.

-New Girl star Max Greenfield has been posting videos of his adventures in home-schooling, and it’s basically a series of burns by his sassy 11-year-old daughter. “Hey dad, I need your shit like I need a hole in the head.”

-One of the worst things about the new Bond movie getting pushed back is that Lea Seydoux‘s big mainstream turn is postponed. She’s on the cover of Harper’s Bazaar UK.

-Disney moved some of its summer release dates, which set off a chain reaction for other movies. Between this and the news that AMC Theatres could run out of money if they are still closed mid-summer, it’s going to be interesting to see what the world of movies will look like when we come out of this.

-A young criminal mastermind hunts down a secret society of fairies to find his missing father in the Artemis Fowl trailer, starring Colin Farrell, Judi Dench and Josh Gad. It was supposed to open in theatres after Memorial Day but will now move to Disney+.