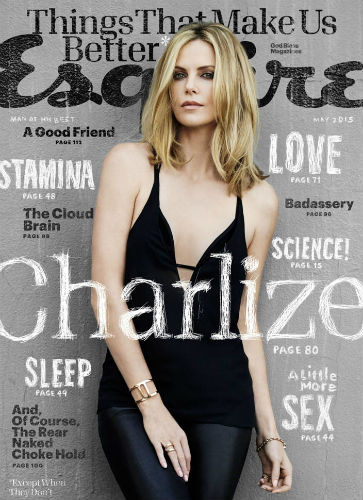 -It looks like the Mad Max press tour is going to be fun. First we had Tom Hardy’s Esquire feature, and now it’s Charlize Theron‘s turn to get candid. In the interview, she gushes about how “hot” fiancé Sean Penn is, and opens up about the onset tension with Hardy.

-There’s a video of Dennis Quaid totally losing his mind on set that went viral today, but is it fake? For the love of Baby Blue Ivy, please tell me it’s fake. I don’t want to not like him.

-Warning: looking at these photos of Idris Elba in Cannes might actually make you pregnant.

-More proof that I need to be friends with the girl who plays Jane on Jane the Virgin.

–Justin Bieber was reportedly put in a choke hold and exiled from Coachella. How douchey do you have to be to get kicked out of the douchiest place on Earth?

–This is how much Rihanna cares about that video that supposedly shows her doing coke at Coachella.

-Perfect human being Chris Pratt is rallying for a 12-year-old with cancer.

–Joss Whedon apologized for that tweet calling out sexism in Jurassic World, saying it was “bad form.” Notice that he refuses to take back the sentiment, though. #InJossWeTrust

-Aw balls. Michelle MacLaren has dropped out of directing the new Wonder Woman movie. On the plus side, she might have dodged a bullet. And also in the plus column, the Captain Marvel movie has nabbed two female writers and is searching for a female director.

–Jake Gyllenhaal and Rachel McAdams had dinner together and launched a thousand new ships.

-SNL’s Kenan Thompson shared some stories about Bill Cosby being super creepy  on the set of Fat Albert.

–Drake keeps trying to walk back his reaction to the Madonna kiss, fools no one.

-There’s a new Avengers: Age of Ultron clip out, for those of you who were worried there wouldn’t be any cooking jokes.

-Poor Jimmy Kimmel had to herd the (possibly drunk?) cast of Avengers: Age of Ultron into playing Family Feud — which none of them had apparently ever seen. The result is some damn fine TV.