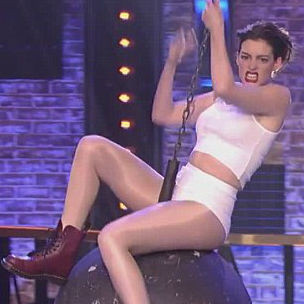 –Anne Hathaway‘s Lip Sync Battle performance is just going to cement your opinion of her. If you’re a fan, you’ll love how committed she is to Miley Cyrus’ “Wrecking Ball.” If you’re not, her going method on this isn’t going to help.

-Well, this is super depressing if true. People reportedly walked out of Octavia Spencer’s book signing because she was being so rude to fans.

–Jay Z is probably not converting a lot of people over to his new Tidal music service today. Beyonce dropped a new song and Rihanna dropped a new video, but you can only access them if you’re a member (or until someone pulls those links).

-Sesame Street’s Game of Thrones parody is flames. “The monster is blue and full of errors.”

-According to People, Kristen Stewart “will survive Robert Pattinson‘s engagement.” That’s good to know, as clearly this is shaping up to be the most important personal struggle of our entire generation.

-Whoomp, there it is. Gwyneth Paltrow and Brad Falchuk finally stepped out as a couple, making their debut at Robert Downey Jr.‘s 50th birthday party.

–Giuliana Rancic reminded us all that she once dated Jerry O’Connell by revealing that he cheated on her with Geri Halliwell.

-Don’t approach George and Amal Clooney in Lake Como unless you want to shell out $600. (Totes worth it.)

-Ugh. I keep telling myself to stop watching spoilery CW trailers, but then I can’t help it. Everyone on Twitter was talking about how The Flash’s latest is bananas and, well, I’m very weak.

–John Oliver flew all the way to Moscow so he could talk to Edward Snowden about dick pics. Seems about right.

-I caught up on a few episodes of Better Call Saul this weekend. Is it a bad sign when the best of the bunch was an episode about someone who *isn’t* the lead character? EW is right to call it “a show at war with itself.”

-Speaking of catching up on TV, I’m looking forward to getting around to The Americans, which is reportedly enjoying “one of the best runs of episodes in TV drama history.”

-West Side Story’s Rita Moreno shows the young ‘uns how a juicy celebrity memoir is done.

-I’m weirdly proud of hometown gal Tatiana Maslany getting a big New York Times profile, like I had something to do with it. (Though I did suffer through any episode of Being Erica that I knew she was going to be in. That’s got to count for something, right?)

-If you plan a gay wedding in Indiana, Zach Braff and Donald Faison will make you a pizza.

–Elisabeth Moss‘ reaction upon finding out who she would date on this season’s Mad Men is both adorable and understandable.

-The trailer for Los 33, for the movie about those rescued Chilean miners is out, and it looks great.