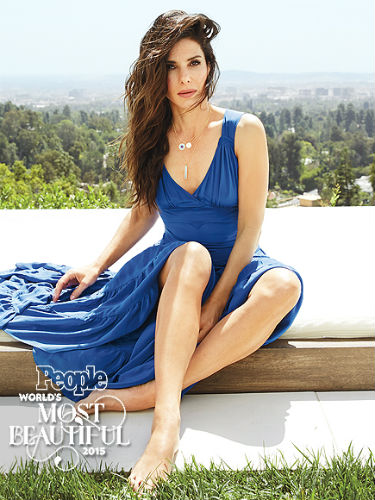 -No complaints here about People magazine selecting Sandra Bullock to be this year’s Most Beautiful person. I can’t believe she’s 50!

–Blake Lively wore six outfits in eight hours, and I hated every single one of them.

-It’s time for our daily moment of appreciation for Amy Schumer. First she face-plants in front of Kanye West and Kim Kardashian on a red carpet in a moment of pure perfection, and then she and Josh Charles star in a spot-on and edgy spoof of Friday Night Lights. Even Connie Britton approves. “Clear Eyes, Full Hearts, Don’t Rape!”

–Andrew Garfield was reportedly “in a dark place” before his Emma Stone split. Did he revisit the reviews of The Amazing Spider-Man 2?

–Ben Affleck addressed the backlash over his request to hide his slave-owning ancestor with the most politian-y post ever.

–Aziz Ansari and the creator of Parks and Rec are reuniting for a new Netflix series.

-Speaking of Netflix, they’ve ordered  a second season Daredevil. I’m only on episode 5 but I don’t love it. I’m not sure if it’s the ultra violence or just superhero TV fatigue.

-Speaking of not connecting with a TV show everyone loves, this is a great piece on admiring but not fully embracing The Americans. I feel the same way about Hannibal and Mad Men, two shows I admire for their technical brilliance, but always find myself thinking about things like the composition of shots instead of feeling swept away by the story/characters. Conversely, “lesser” shows on the CW tend to take up an embarrassing amount of brain space for days.

-Tom Cruise was “scared shitless” when hanging off an airplane for the new Mission Impossible movie. Wait, robots feel fear?

–Rita Wilson, Mamie Gummer and others shot a satirical video about how men in Hollywood should “have it all.”

-This is why sometimes it’s best *not* to read celebrity interviews. Jason Dohring boasts about not eating candy in years.

-What it’s like when your mom marries your celeb crush, according to Rumer Willis.

–Taylor Schilling and Adam Scott share uncomfortable moments with Jason Schwartzman in the trailer for The Overnight.