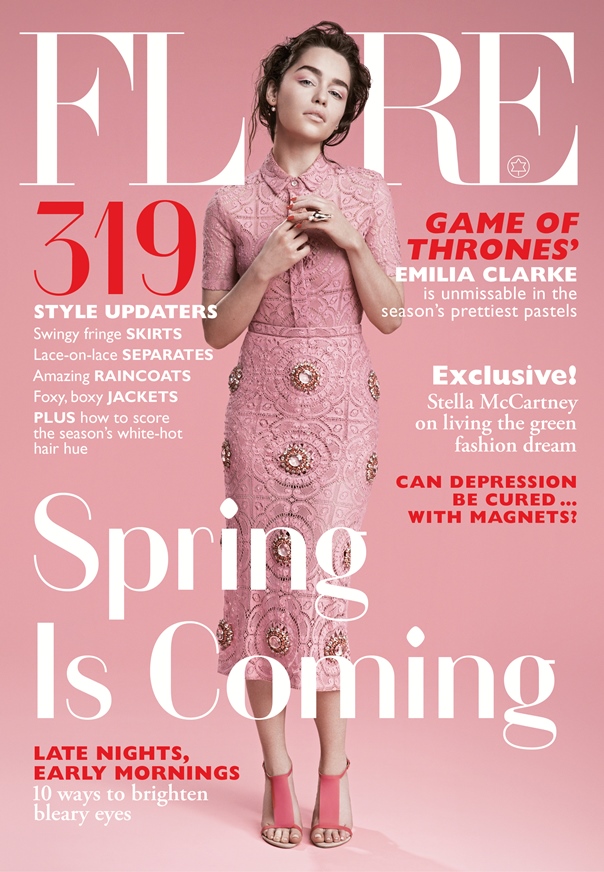 -Bow down to the Khaleesi! Game of Thrones star Emilia Clarke looks amazing on the new cover of Flare.

-Here’s what happens when you ask Kevin Spacey the typical questions female stars get asked on the red carpet. (Spoiler alert: it ends with an f-bomb.)

–Idina Menzel didn’t exactly kill it at the Oscars. You could see how upset she was about that voice crack at the end. Well, now she’s redeemed herself by singing ‘Let It Go’ with Jimmy Fallon and classroom instruments. Magical!

-Speaking of Frozen songs, here’s a clip of Kristen Bell and Santino Fontana singing “Love Is An Open Door” live.

–Ellen Degeneres finally tipped the pizza guy from Oscar night. Not only did she give him the $600 she collected in the audience, she also threw in an additional $400.

-Do you want to see Ricky Martin seductively bite Jennifer Lopez’s ear? Then you’re a freak — and you’ll love her new video.

-The John Travolta name generator is awesome. I got “John Mceezald.” (Travolta has since apologized for the slip.)

-Mexico and Kenya both want to claim Lupita Nyong’o as their own. Don’t we all?

-Meanwhile, Lupita’s brother is the coolest kid in his class now.

-Last week’s Parks and Recreation was kind of lame with the exception of the Iron Throne bit at the end. The newly released extended version of that scene is even funnier. I love how Amy Poehler keeps trying not to crack up.

–Jimmy Fallon and Tina Fey tried a bit last night that went horribly wrong — and it was hilarious.

-Oh god. Did last night’s How I Met Your Mother prove that the show is going to end the way the Internet feared it would? (Spoilers!)

-Also, I’m really hoping True Detective doesn’t end the way the Internet thinks it will, either.

–Thurston Moore spoke out about the affair that ended his marriage to Kim Gordon. Everything is terrible.

–Katie Holmes’ attempt to be a fashion designer is over. ::sadtrombone::

-The Bachelor Juan Pablo continues to be a mensch. He reacted to the Women Tell All episode by saying they should “have worried more about being sober.”

-When I was in Denmark last fall, every woman seemed to be wearing chunky sneakers with skinny pants, which is what Chanel just sent down the runway. Sigh.

-Speaking of Chanel, I love this optical illusion dress Keira Knightley wore to the show.

-The new M83 song on the Divergent soundtrack has a sensual sax solo and I still don’t hate it.

–Cameron Diaz is talking about her vagina again.

–Mila Kunis must really love Ashton Kutcher. She’ll guest-star on his struggling Two and a Half Men.

-It had to happen sooner or later: someone is putting on a James Franco film festival.

–Hugh Jackson has come to terms with the fact that Wolverine will eventually be recast.

–Iggy Azalea’s new Clueless-themed music video for “Fancy” is so, so good!

–American Authors performed “Best Day of My Life” on Kelly and Michael yesterday and it was like every single person in that band started the song at a different time and just went with it. Definitely not the best day of their lives.

–Nigella Lawson is going makeup-free(ish) on the new cover of Vogue UK.

-I hate this dress on Katy Perry.

-Community’s Dan Harmon has a new documentary coming up called Harmontown, and in the trailer he drinks his way across the country.

-In other Community news, Gillian Jacobs was a delightful guest on Speakeasy.

-A new trailer for Captain America: Winter Soldier has landed.

Colton Haynes Opens Up About Rehab