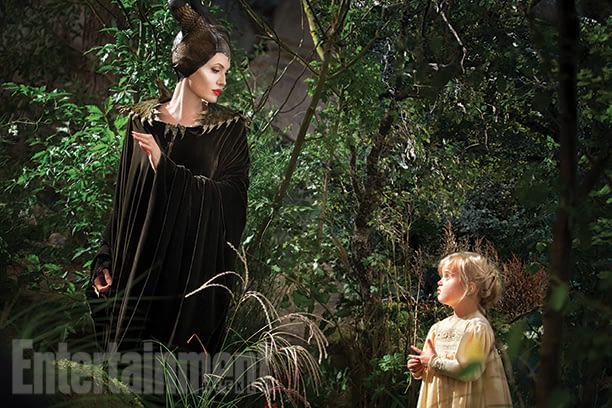 –Angelina Jolie covers the latest issue of Entertainment Weekly in full Maleficent mode, and the magazine also features a still from a scene with her youngest daughter Vivienne.  She says her daughter was the only kid on set not scared of her, but her son Pax ran away crying.

-Speaking of celebrities and their kids, Perez Hilton is the latest to jump on the “no kid photos” bandwagon, with the clearest calling out of star shenanigans yet: “Many celebs “stage” these pictures and then sell them to paparazzi themselves. Countless do this, and there’s no need to name names.”

-Is it just me, or does Robert Pattinson look incandescently happy whenever he’s been photographed on the Toronto set of his new movie?  It’s cool, Rob. We’ll let you stay if you want.

–Lupita Nyong’o’s speech at the Black Women in Hollywood Luncheon is perfection. “You can’t eat beauty. It doesn’t feed you.”

-Here’s our first peek at the new Annie remake trailer.

-Video of Justin Bieber‘s urine test at a police station will be released — though his junk will be blurred out. The tape was requested under Florida’s public records laws.

-Meanwhile, the police footage is giving everyone a chance to closely examine all of his stupid tattoos.

-Is Scarlett Johansson‘s pregnancy messing with the Avengers 2 shoot?

–Jimmy Kimmel doesn’t really understand why Rob Ford is so upset with him. “I asked him about drinking and smoking crack — what were we supposed to talk about, his other hobbies?” To make up for it, he aired this video of our fair city.

-This is an…odd choice: Conan O’Brien will host this year’s MTV Movie Awards on April 13.

–Leah Remini is getting her own TLC reality series. Let’s hope she uses it as a further platform to bash Scientology.

-I really disagree with Vulture’s article on why we don’t need True Detective to solve its crime, we just want more of Rust’s philosophies. I only started caring about this show (and “caring” is probably much too generous) in the last couple of weeks when the case picked up.

-The New York Times did a good story on Veronica Mars and what the movie could be for the industry.

-Meanwhile, press screenings have started. Reviews are embargoed but early word is promising.

-Well, this sucks: Captain Phillips star Barkhad Abdi is broke. He was only paid $65k for the film and hasn’t found another acting gig since.

-Someone give John Mayer‘s publicist a raise, STAT.

–Taylor Swift and her BFF went on a road trip and Instagrammed all the way.

-Awww, man! Batkid was supposed to make an appearance at the Oscars but his segment was inexplicably cut.

-The Wire’s David Simon is in talks to take on the Oprah-produced HBO mini-series about Martin Luther King. I like all of those words.

-Speaking of Opes, she gives Lindsay Lohan a stern scolding in the first trailer for Lilo’s new reality series.