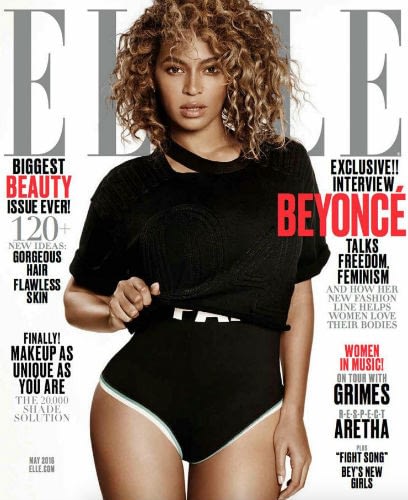 –Beyonce hasn’t given a sit down interview in three years, but she just made it worth the wait. In her new Elle cover story,  she discusses self-care, stands up for feminism (“I don’t understand the negative connotation of the word, or why it should exclude the opposite sex”), addresses the backlash to her “Formation” video (“If celebrating my roots and culture during Black History Month made anyone uncomfortable, those feelings were there long before a video and long before me”), and talks about being a business woman (“Power is making things happen w/out asking for permission.”) It all feels very controlled and rehearsed (maybe even emailed?), but that’s all part of why we love her.

–Melissa McCarthy killed it during her lip sync battle against Jimmy Fallon. Her flying props beat his fake rollerskating.

–Amy Schumer very rightly criticized Glamour magazine for putting her in their plus-size issue without telling her.

–Joel McHale is going to play Chevy Chase in a Netflix movie. I want this in my eyeballs right now!

-In his Reddit AMA, Johnathon Schaech said it was “an honour” to be Ellen’s beard in the 90s. How great would it be if everyone who’s ever bearded in Hollywood dished the dirt?

–Aaron Paul says three Breaking Bad fans crashed his wedding and he didn’t realize until he saw the photos later.

–Charlize Theron actually had the audacity to complain in her GQ cover story that she’s too pretty to be cast in meaty parts. “How many roles are out there for the gorgeous, fucking, gown-wearing eight-foot model?”  Stahp!

–Heather Matarazzo had the best reaction to Charlize.

–Neil Patrick Harris and David Burtka celebrated their 12th anniversary together in Canada because we’re awesome and not passing ridiculously unbelievable laws.

–Emilia Clarke wants Game of Thrones to end with “close-ups of all the boys’ penises.” The line forms behind me, sister.

-Also, she dated Seth MacFarlane?!  How does this guy keep pulling famous beauties?

-This is good news: Maze Runner star Dylan O’Brien is on the mend.

–Daisy Ridley rapping about Star Wars for John Boyega is all kinds of embarrassing.

-Here’s the first full trailer for Disney’s adaptation of The BFG by Steven Spielberg.

Sofia Vergara Tried to Dance at the Grammys. It Didn’t Work.

Amanda Bynes Kicked Out of Gym Class for Odd Behavior