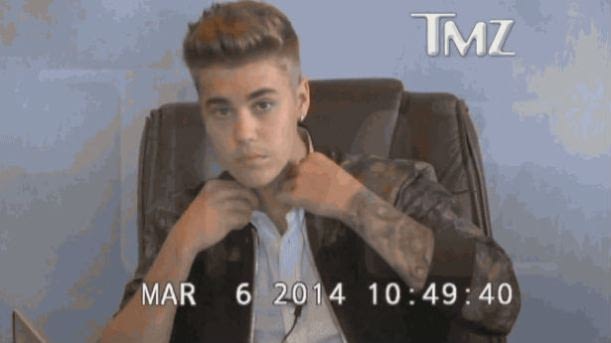 -I’m not sure how even the most hardcore Justin Bieber fan can defend him after watching his jerky behaviour on this deposition video. (I love how his lawyers tried to cover for the fact that he doesn’t seem to know the difference between “detrimental” and “instrumental.”)

-Meanwhile, did Justin Bieber and Selena Gomez spend the weekend together? People reports they had a romantic breakfast on Friday in Texas, while a rumoured sighting at a local Footlocker attracted swarms of tweens and shut down a mall.

-Is Prince Harry and Cressida Bones‘ sudden burst of public appearances meant to distract us from Prince William and Kate?

-Does this Instagram video feature audio of Blue Ivy singing “Drunk in Love” with Beyonce?

-Here’s Miley Cyrus in Marc Jacobs’ new campaign. I can’t imagine anyone who can afford to buy MJ would appreciate this, but what do I know?

-I don’t usually watch The Voice but I saw an episode a couple of weeks ago and Shakira was a g.d. delight! So her new interview with Billboard is really depressing, especially the part where she calls her boyfriend, Spanish footballer Gerard Piqué, “territorial” and says he doesn’t let her do music videos with men anymore. Sigh.

–Christian Bale and his wife Sibi Blazic are expecting their second child.

-After being spotted in Brussels and Amsterdam, Rihanna and Drake were then seen together in London. When are we officially allowed to get our hopes up about this?

-In other reunion news, Michael Douglas and Catherine Zeta-Jones were spotted holding hands.

–Andrew Garfield continues to disprove last week’s stupid rumour about him snubbing Batkid at the Oscars by inviting the lil’ guy to the Amazing Spider-Man 2 premiere.

–Craig Ferguson is set produce a TV version of the Facebook page ‘I F*cking Love Science.’

-In her new side-booby cover story for New York Magazine, Elisabeth Moss talks about her “extremely traumatic and awful and horrible” marriage to Fred Armisen. (Also, I had no idea she was a Scientologist.)

–Katie Holmes is returning to TV in a new ABC drama, which may be a great career move for her.

-I don’t watch Veep, but this new promo makes me think I should start.

-Speaking of new TV promos, here’s the latest for Orphan Black, and a new one for Game of Thrones.

-Speaking of Jennifer Garner, I’m really hoping this blind item has nothing to do with her household, but this and this make me wonder.

–Zac Efron says he hasn’t ruled out the possibility of another High School Musical movie.

-With the crazy amount of good TV one last night, I missed the premiere of Lindsay Lohan’s reality show. The ratings were just so-so.

-As for the next season, creator Nic Pizzoletto teases, “Hard women, bad men, and the secret occult history of the US transportation system.”

-Hey, remember when Stacy Keibler was dating George Clooney and kept trying to convince us that she’d be happy without ever getting married or having kids if that’s what George wanted? They only broke up six months ago, and she’s already gotten hitched to her new boyfriend.

-Need a good cry? The Simpsons bids farewell to Mrs. Krabappel in her final scene.

-I don’t know if it was the time change or just a general weekend hangover, but today was rough. This stream of Kylie Minogue’s new album helped out a lot. (Yes, there’s a song called “Sexercise.” Yes, it’s awesome.)

-Congrats to Glee Harry Shum Jr., who popped the question to his girlfriend Shelby Rabara in Hawaii. I really hope that proposal included some poppin’ n lockin’.

-In order to prep for the Veronica Mars movie (only 4 more days, marshmallows — and the early reviews are good), here’s the definitive ranking of all 64 episodes.

–Ian Somerhalder did a cover shoot with Esquire China and was all kinds of charming in this behind-the-scenes video.

-Remember last week, when Cate Blanchett and Amy Adams were spotted outside a tattoo parlour? Rumour has it they might have inked a tribute to pal Philip Seymour Hoffman.

–Frank Ocean is not a fan of Chipotle.

–Christin Milioti knows what you think is going to happen to her How I Met Your Mother character, and she thinks you’re “insane.” (Or does she??)

–Lena Dunham‘s SNL had some highs and lows, and her Adam & Eve skit was definitely a high.

-A Miley Cyrus fan has been detained after sneaking into the singer’s dressing room and tweeting about it.

-Aw man, the Normal Heart trailer just gave me goosebumps. Taylor Kitsch, Matt Bomer and Julia Roberts are all great, but no one can hit me in my heart guts quite like Mark Ruffalo.