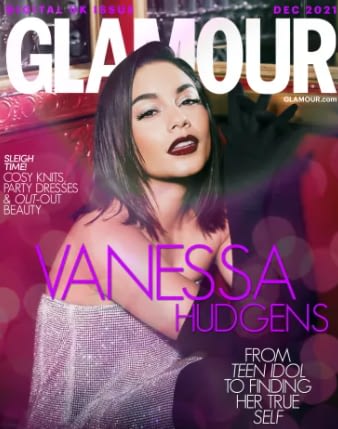 -Promoting tick, tick…BOOM!, Vanessa Hudgens appears in Glamour UK’s digital issue and talks about learning of her dad’s death shortly before doing Grease Live. “There was never a moment where I thought that I wouldn’t do it because my dad would want me to do it. He gave so much time and energy into me achieving my dreams and for me to have a career where I can do what I love. So I felt like I needed to do it, because that’s what he would’ve wanted [me] to do.”

–Jack Harlow covers Variety’s Hitmaker issue and talks about trying to keep the music from getting lost in all the trappings of fame. “Once you become actually famous, it’s only half about the music. They’re just showing up to see you in the flesh, put you on their Snap, throw some panties at you, whether they know a single lyric or not.”

–Alec Baldwin‘s interview airs tonight, and he’s going on record to say that his finger was never on the trigger. A lawyer for the assistant director who allegedly handed him the gun is backing him up.

–Seth Rogen told a hilarious story about how and he and his wife got “stoned as hell” before going to Adele’s concert special, not realizing it would be televised. “I got an invitation – “Do you want to go to a small Adele concert?” is what I remember absorbing…And then me and my wife are like ‘Ok, maybe we can just slink into the background. We’re not equipped mentally to deal with doing this right now’…We’re in front row centre. I don’t know Adele. And if Adele, you’re watching this: Why did you do that? The whole time I’m watching this like, ‘There’s so many more famous people than me here who should be sitting where I’m sitting…Like, I was in front of Drake!'”

-Love this profile of Scott Speedman, in which he talks about suddenly being on two hit shows (Grey’s and You) and his new baby. Bring on the Speedmanaissance!

-As expected, Rihanna is not pregnant and not happy with the persistent rumours. “Y’all breed me every year dammit lol”

-An appeal court has upheld Meghan Markle’s victory against the Daily Mail.

-This is awful: Beasts Of The Southern Wild star Jonshel Alexander has died at 22.

–Demi Lovato has given up that “California sober” silliness.

–Matthew McConaughey says he mixes his own cologne to create a signature scent. But does anyone believe this man smells good? I just can’t see it.

-It sounds like the TIFF audience was lukewarm at last night’s screening of Del Toro‘s Nightmare Alley, which worries me because I’ve seen them give standing O’s to absolute garbage.

-Did Danny DeVito basically write Batman fanfiction? I’m into it.

–Kristin Chenoweth says she and pal Ariana Grande have gone on double dates together. “With other partners, yeah, we had some dates,. We just go, and we like bowling, we like truffle pizza from Craig’s here in L.A.”

-Wait, Gossip Girl is back?? I know things get lost in the shuffle these days, but this show has less than zero buzz.

-Congrats to Aaron Paul and his wife, who are expecting another baby.

–Drake’s wanders alone through his mansion in Toronto’s Bridle Path in his new video, which was shot during social distancing. His poor neighbors must be like “damn, there go the fireworks again.”

–Aaron Paul and Bryan Cranston are on the cover of Esquire Mexico to promote their tequila brand.

-Bless Tom Holland for getting a bunch of hot celebrities to do shirtless handstands on Instagram.

-Here’s a preview of Lindsay Lohan‘s new song, “I’m Back.”

–Harry Styles called into a radio show and talked about his time self-isolating with friends. “Well, I’m with people who have real jobs, so they’re working… which leaves me — someone with not a real job — doing kind of whatever. I’m reading a lot, doing a lot of writing, trying to exercise, trying to be outside. And then we kind of all get together in the evening and watch a film or something like that.”

-On last night’s Kimmel, Jennifer Aniston revealed that she is the only person in the world that is loving all the extra dishwashing that social distancing results in. “I might have acquired a new OCD kind of a situation. Not only do I clean constantly — dishes are my new favourite thing in the world cause not only are you doing your dishes, but you’re washing your hands a lot.” She and Jimmy also surprised a nurse who tested positive.

-New Girl star Max Greenfield has been posting videos of his adventures in home-schooling, and it’s basically a series of burns by his sassy 11-year-old daughter. “Hey dad, I need your shit like I need a hole in the head.”

-One of the worst things about the new Bond movie getting pushed back is that Lea Seydoux‘s big mainstream turn is postponed. She’s on the cover of Harper’s Bazaar UK.

-Disney moved some of its summer release dates, which set off a chain reaction for other movies. Between this and the news that AMC Theatres could run out of money if they are still closed mid-summer, it’s going to be interesting to see what the world of movies will look like when we come out of this.

-A young criminal mastermind hunts down a secret society of fairies to find his missing father in the Artemis Fowl trailer, starring Colin Farrell, Judi Dench and Josh Gad. It was supposed to open in theatres after Memorial Day but will now move to Disney+. 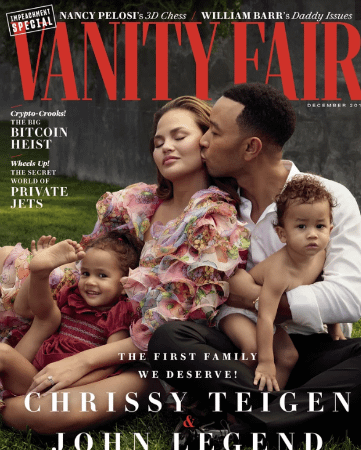 –John Legend and Chrissy Teigen‬ cover the latest issue of Vanity Fair, in which they talk about getting together (“It got serious pretty quickly. She just entertained the hell out of me, texting me. What people respond to in her tweets today was the same energy in those texts. I didn’t know that I wanted someone funny until I was actually with someone funny”) and why they’re supporting Elizabeth Warren (“She’s the best candidate running today and she comes at it with joy and with sincerity and with a wealth of knowledge and experience”).

-Oof, the video of Ben Affleck stumbling out of a Halloween party this weekend is a hard watch. He was spotted outside Jennifer Garner’s house yesterday, where he told paps “It was a slip but I’m not going to let it derail me.”

-Speaking of celebs who seem like they might need help, Supernatural’s Jared Padalecki was arrested in Austin late Saturday night and is reportedly facing two counts of assault and one count of public intoxication after he allegedly struck both a bartender and the general manager of a club in the face. Terrible timing, especially since he just landed a new show.

-Halloween hasn’t even happened yet, but Gabrielle Union has already won it this year.

-Apple+ lifted the embargo on the reviews of their new TV shows, and Jennifer Aniston and Reese Witherspoon‘s Morning Show is not getting good reviews. Critics only saw the first three episodes so far, but do not seem impressed. Surprisingly, the one people seem to like most is Hailee Steinfeld’s Dickinson.

–James McAvoy and production assistant Lisa Liberati (who he started dating in 2017 — two months after splitting from his wife of 11 years) are reportedly married.

-I guess I wasn’t the only one this morning who was surprised/revolted to learn that they’re still subscribed to Louis C.K.’s newsletter. I have never hit an unsub link faster.

-Game of Thrones creators D.B. Weiss and David Benioff appeared at the Austin Film Festival this weekend, and someone live-tweeted their panel answers — a thread which quickly went viral because their admissions of incompetence were jaw-droppingly candid. They acknowledged that they made “basic writing mistakes” on the pilot, had no idea how to work with costume designers, didn’t feel the need to delve into the books to learn about the characters, and called the whole process an “expensive film school.” Talented female and POC writers are out there sweating in the trenches for their big break, but these two unqualified dolts were given $6 million an episode to learn on the job. And they’re not too embarrassed to openly talk about it! (I mean, why should they be? They landed Star Wars trilogy despite of it.) White dudes will always fail up…

-In the bossiest boss move, Jane Fonda accepted her BAFTA award while being arrested!

-Netflix might be planning to roll out a feature that allows users to binge at higher speeds, which might be the worst move ever. Tighten up your damn shows through writing and editing, not with fast-forwarding. (Aaron Paul also has strong feelings about this.)

–Trent Reznor addressed the Nine Inch Nails sample in “Old Time Road” — and his response is a pretty damn awesome example of lifting up smaller artists: “I said [to my manager], ‘Look, I’m fine with it. I get how stuff goes. They’re not saying they didn’t sample it. Just work it out, but don’t be a roadblock to this.’…Those guys should be the ones the spotlight is on. It was flattering, and I don’t mean to be disrespectful, but I don’t feel like it’s my place to shine a light on me for that.”

–This Paul Rudd video is amazing because: 1) splitting an apple with your bare hands is a killer party trick, and 2) I learned that his new Netflix show costars the amazing actress from Hulu’s This Way Up.

-The CW is in a spinoff frenzy right now. The latest is a new Superman & Lois Lane series from Greg Berlanti, following their life as parents. I’m not mad about it. Tyler Hoechlin was so, so good in the crossover last year, and I liked what little we saw of Elizabeth Tulloch‘s Lois.