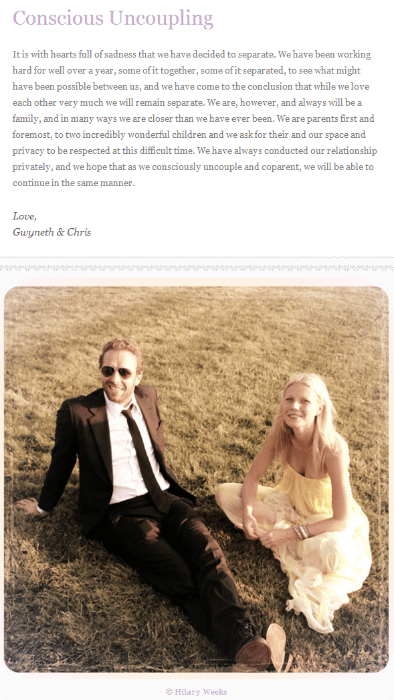 -Whoa! Gwyneth Paltrow and Chris Martin just announced their separation after 11 years of marriage on GOOP in a post titled “Conscious Uncoupling.” The announcement quickly crashed the site (probably because everyone who subscribes got a cryptic email that just contained the logo and a single line: “Click here for a note from GP.”)

-Here’s more conveniently timed stills from Mila Kunis’ appearance on Two and a Half Men.

–Mark Wahlberg thinks Transformers is “the most iconic franchise in history.” Oh, sweetie.

-In a recent interview, Andrew Garfield talked a lot about his “package” while Emma Stone looked on, horrified.

-Just when you thought Chris Brown couldn’t get any worse, prepare to be nauseated by his new music video for Loyal. Did I mention that it’s sponsored by AshleyMadison.com? Because if you’re going to beat women up, you might as well cheat on them, too.

–Owen Pallett wrote a piece examining Katy Perry’s “Teenage Dream” through the lens of music theory, and now I want him to review every pop song ever made. Can he get on that already?!

-Speaking of pop criticism, Matt Zoller Seitz wrote a fantastic essay on the lack of technical content in movie and TV reviews. I want to subtweet this line to all my Facebook friends who suddenly seem to think they’re film critics: “[Critics need to know the] nuts and bolts: where the camera goes, and why it goes there. Why a scene included a lot of over-the-shoulder shots of a character speaking, even though the angle prevents you from seeing their lips moving. Why a particular scene was played entirely in closeup, or entirely in long shot.”

-That’s why I follow Emily Nussbaum, who tweeted this about The Good Wife’s courtroom shots in the last episode.

-Speaking of The Good Wife, I caught up last night. No spoilers, but ooh boy. Here’s the departing star on last night’s Letterman explaining what the hell happened.

-And here’s Weeds star Hunter Parrish talking about how he became part of the series’ most shocking (and hate mail-getting) twist. I really, really liked his performance in that ep.

-In other TV twist news, an actress on Hannibal (which I know is very, very good but I was way too much of a wimp to stick with it, even for Gillian Anderson) wrote a really great blog post about what happened to her character last week and all the cries of sexism/racism that followed. I don’t follow the show, but Bryan Fuller has a pretty great history when it comes to writing kickass female characters.

–Lauren Graham participated in a Reddit AMA and reconfirmed my long-held belief that we are meant to be BFFs.

-Meanwhile, Mindy just posted this shot from an upcoming scene on her show and it gave me all the squees.

-Also, she looks amazing in Vogue.

-Speaking of Vogue, here is a collection of the best lines from Kimye’s Vogue profile so you don’t have to stoop to reading it yourself.

–Ellen Page is a master of the subtweet.

-The first full trailer for 24: Live Another day has arrived. WHY IS EVERYONE SHOUTING?!?

–The Office Time Machine catalogues every cultural reference in The Office, sorted by year. Incredible.

-I despise the word “bromance” but I’ll click on any headline that involves Patrick Stewart and Ian McKellen.

–Peter Dinklage talks nude scenes in the upcoming season of Game of Thrones.

-SXSW is long over but the NPR Austin 100 download is still available, featuring 100 songs from some of the festival’s hottest acts.

–Diddy has reverted back to Puff Daddy for his new album, for the three people out there who still care about him.

-Speaking of time-warping, the Spice Girls (minus Victoria Beckham, natch) are in talks to tour with the Backstreet Boys. Emma Stone is going to lose her shit.

-Character actor James Rebhorn, who died after a long battle with skin cancer, wrote his own obit, and it’s wonderful. “He was a lucky man in every way.”

–Billy on the Street and Will Ferrell play my new favourite game: “Would Drew Barrymore Like That?”

-You can also watch Neil Patrick Harris and Billy Eichner yell at people on the streets of Manhattan about the HIMYM finale.

-Holy crap, it’s been 30 years since The Breakfast Club?! Feels like just yesterday that Judd was fist- pumping the air…

-Need to catch up on Mad Men before it’s return? This video tells you everything you need to know in under 2 minutes.

-Speaking of Grey’s Anatomy stars, what kind of show can’t figure out how to properly use Smash Williams?!?

-Rookie Blue is getting a 22-episode order this season, which pretty much ensures that I won’t watch it.

-Sweet baby jesus — Wolfmother is back with a new album!

-There’s a new featurette for The Fault In Our Stars. I know I should trust John Green, but I’m so worried about this adaptation.

-The first book in the Veronica Mars mystery series isn’t getting great reviews, but you can judge for yourself by listening to the first five minutes of the audiobook, narrated by Kristen Bell.

-Speaking of audio books, listen to Jason Schwartzman and Katy Perry read a story from B.J. Novak’s One More Thing.

-In the latest example of category fraud, Showtime’s Shameless is submitting under “comedy” at the Emmys this year. ‘Cause nothing says laughs like toddlers who OD on coke.

-Here’s the latest trailer fro Tom Cruise’s Edge of Tomorrow. It’s got a bit of a Source Code vibe to it, which I don’t hate.