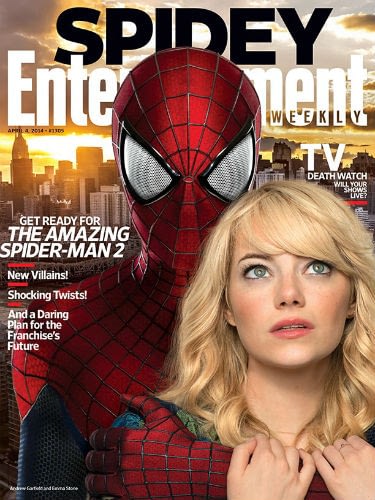 -The Amazing Spider-Man 2 gets the cover treatment on next week’s EW. Meanwhile, how cute is Andrew Garfield with this tiny Spider-Man?

–Mila Kunis made her first public appearance since her pregnancy announcement — though you’d never know it from this outfit.

–Demi Moore seems to be celebrating her ex’s impending bundle of joy with some really terrible boots.

–Mindy Kaling might be the first person to ever say “I don’t want to be skinny” in Vogue, making me love her even more.

-Meanwhile, Vulture eavesdropped on a hilarious conversation between Mindy and Parks and Rec creator Mike Schur.

-Sweet! Yo La Tengo and The Decemberists will be part of that Parks And Recreation concert episode.

-I like this rundown of TV characters who’s names have become verbs.

–Gwyneth Paltrow is getting a lot of flack for a recent interview in which she implied that being a movie star mom is harder than being an office worker mom. The response was swift and hilarious.

-Speaking of hilarious, here’s a compilation of the Internet’s reaction to her “conscious uncoupling.”

-Meanwhile, she sent out a typical GOOP newsletter this week (about chicken recipes, of all things) but she did add an extra note at the end of the intro saying “P.S. CM and I in deep gratitude for the support of so many.” (Proving once again that she really, really needs a copy editor.)

-Also, the Alexa Chung/Chris Martin speculation is everywhere now, though Lainey’s been hinting at it for a while.

–James Van Der Beek is on a roll this week. He apologized for being a jerk on Seth Meyer’s show, and then he tweeted a photo with Grams!

-Despite what she told Oprah on last week’s ep of her reality shows, Lindsay Lohan is hitting the clubs again. At least she’s not drinking.

-Here’s a Chris Evan timeline which helps to explain how he fell out of love with acting.

-I haven’t read Television Without Pity for a while, but it was a huge influence on me early in my career and made me realize I wanted to write about TV. It will be missed.

–Nina Dobrev and Nikki Reed shot a PSA for Obamacare.

-This gallery of the best HIMYM episodes reminded me that at one time, this show used to be really, really good.

–Angelina Jolie is in Sarajevo to discuss rape prevention in military training.

-Once Upon a Time in Wonderland has officially been given the hook. I hope the guy from Being Human UK gets another shot at US network TV, though. He’s adorable.

–Rihanna and Drake were spotted together — time time with hand-holding/thigh-grabbing.

-The University of Iowa doesn’t want Lena Dunham and/or her boobs on their campus next season.

–The Good Wife preview for Sunday night’s episode makes me want to curl up in the fetal position and/or day drink.

-Speaking of which, I liked this article on the hollow gamesmanship of TV game-changers like TGW and New Girl’s last episodes.

-A Colbert Report tweet about Asians has some calling for the show’s cancellation and spawned a whole bunch of controversy. But the tweet was actually a quote from his show this week, and was actually making fun of Dan Synder, not Asian people. Patton Oswalt just shut the whole thing down.

–Beyonce ended her tour this week with an onstage ugly cry.

–Owen Pallett has written another pop review using music theory. This time, he explain why Daft Punk’s “Get Lucky” is popular. Man, I hope this becomes a weekly column.

–Tom Hiddleston used to have frosted tips. That is all.

-The only reason I kind of want to see Noah is because Emma Watson is reportedly amazing in it.

–Lorde’s boyfriend wrote a long blog post about their relationship.

–Aaron Paul and Amanda Seyfried got up close and personal with some fans in Pittsburgh.

–George Clooney must be serious about Amal Alamuddin — he was spotted taking her on a double date with John Krasinski and Emily Blunt.

–Liam Neeson looks great on the cover of GQ.

–Joss Whedon talks about shooting the action scenes for Avengers 2 in Seoul — and he’s already apologizing.

-This new trailer for The Purge: Anarchy reminds us to just stay inside.

-I loved loved loved this movie starring Keira Knightley and Mark Ruffalo when I saw it at TIFF last year (then it was called Can A Song Save Your Life? but it appears to have been renamed to the blander Begin Again). In any case, it’s from the guy who did Once and the first trailer is here.