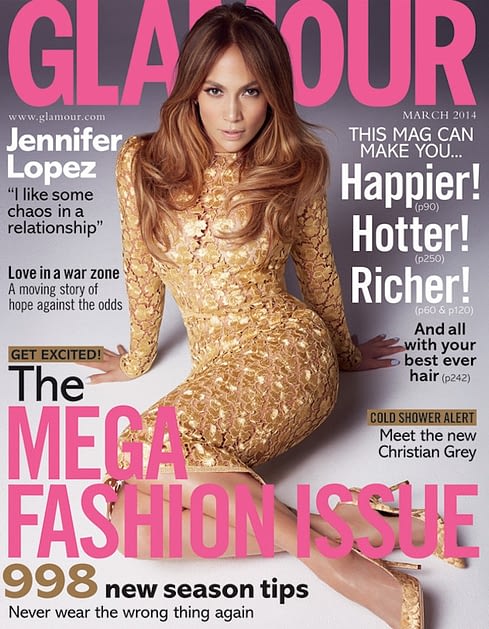 [NOTE: I’m taking the rest of the week off because I’ll be in Paris (woot!). If you get bored, feel free to watch this video of Vin Diesel dancing alone to Katy Perry and Beyonce for 7 minutes]

–Jennifer Lopez looks lovely on the cover of Glamour UK. Mermaid-y, but lovely.

–Kristen Bell and Dax Shepard took to Twitter to call for a boycott of magazines that pay for photos of celebrity children. I fully support it. There’s a reason you won’t find links to photos of kids on this blog.

–Emma Watson looks like a princess on the new cover of Wonderland.

-Here’s a preliminary list of which movie trailers we can expect to see on Super Bowl Sunday.

–Peter Facinelli and Jaimie Alexander aren’t engaged, just in case that rumour was keeping you up at night.

–Ronan Farrow is getting his own MSNBC show, which explains all the tweeting.

–Last night’s How I Met Your Mother was all about the mother. Here’s a recap of all the times she’s previously been mentioned on the show.

–Jude Law testified in that phone hacking case yesterday, and ended up talking about the time Sienna Miller cheated on him with Daniel Craig.

-After this weekend’s SNL, everyone on Twitter was talking about how Cecily Strong looked preggers, and she called them all “bully dickheads,” which is fair.

–Keira Knightley admits that she has a pouting problem.

–Jennifer Lawrence looks practically naked as Mystique on the cover of Empire.

-Sweet! Chris Hardwick has reunited the cast of The State for @midnight.

–Scarlett Johansson’s SodaStream commercial has been banned, but you can watch it here.

-In a new behind-the-scenes clip from Thor: The Dark World, we get to see what Loki looks like in Captain America‘s red, white and blue.

-If Woody Harrelson finds your lost phone he’ll turn it into the police — but not before snapping some selfies.

–The Orange Is the New Black cast is posting behind-the-scenes photos on Instagram.

–Will Wheaton and Felicia Day are teaming up for another Game Day. Last year’s was awesome.

–Tina Fey is the latest celeb to guest star on Jerry Seinfeld‘s Comedians in Cars.

-Wait, *that’s* what Jay Z is rapping about in “Drunk in Love”? Gross.

–Ariana Grande and Amy Adams wore the same D&G dress, except Amy didn’t pair hers with bad pantyhose and satin shoes, so she continues to be the winner at life.

–Sir Mixalot tweeted a photo of Harry Styles peeing in a bush and commented on his “cute bum.” That’s clearly the weirdest sentence I’ve ever typed…

–Heidi Klum and her boyfriend/bodyguard are dunzo.

Get Ready For a Whole Lot of Ron Burgundy

Paul Mescal Dances It Out