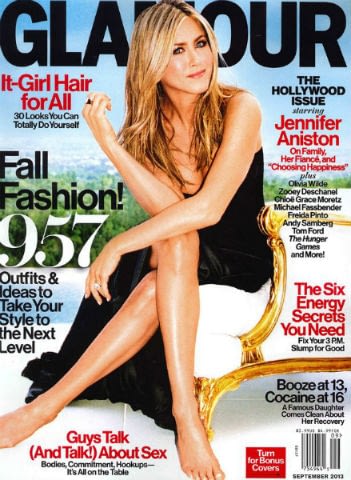 –Jennifer Aniston covers the new Glamour, where she reveals that she really, really likes tank tops. Like, really.

–Nigella Lawson and Charles Saatchi were granted a preliminary divorce after a hearing that lasted all of 70 seconds.

-Full House star Jodie Sweetin is denying reports that she’s back in rehab.

-I keep thinking that I want to go blondish, which is ridic because I can barely drag myself to the hairdresser for upkeep every few months as it is. But Gabrielle Union is making me want to soo bad!!

–Rihanna has won a victory in a legal battle against Topshop.

–DMX filed for bankruptcy…so he could go to Europe.

-Remember Emily Nussbaum’s defense of Sex and the City from a few weeks ago? Chris Noth thinks she’s spot on.

-Now that Breaking Bad is wrapping up, studios are in hot pursuit of Vince Gilligan – deservedly so.

–Neil Patrick Harris said on Conan last night that he doesn’t mind if you touch his butt. Something tells me he’s soon going to regret saying that.

–Paul Haggis, who knows a thing or two about leaving Scientology, is jumping to Leah Remini’s defense.

-Aw nuts! Rob Lowe and Rashida Jones are both leaving Parks And Recreation. My heart is LITERALLY breaking.

-This might be the happiest Joaquin Phoenix has ever looked ever.

–David Conrad (who I’ve loved ever since Relativity), has just signed on to Joss Whedon’s new show, Agents of S.H.I.E.L.D.

Tiffany Haddish Has a Hookup Pact with Brad Pitt

Robert Pattinson Almost Lost Batman Before He Even Had It