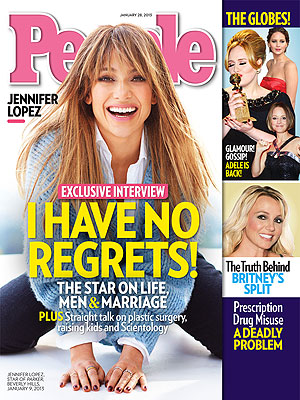 –Jennifer Lopez is reportedly super unhappy with her People magazine cover. I’m not loving her hair, but I think the relatively makeup-free look makes her way seem younger than she usually looks.

-Meanwhile, JLo and Casper Smart just adopted a puppy together.

-Well, if you HAVE to tweet a photo of your naked belly bump, I guess the least obnoxious way to do it is Kristen Bell’s.

-In case you missed Lance Armstrong‘s interview with Oprah, here’s the only clip you need to see.

–Michael Jackson’s dermatologist, Dr Arnie Klein, vaguely implied that he’s the father of Prince Jackson by posting Prince’s drivers license photo next to a similar looking pic of him as a teen with the words “hmmmmm.”

-Speaking of biological baby daddies, Mel Gibson at centre of speculation he could be the father of Jodie Foster‘s sons.

–Rosemarie DeWitt is leaving The Newsroom before she even appeared in an episode. It’s probably for the best.

-He’s no Russell Brand, but at least Geri Halliwell is dating a Russian millionaire.

-Meanwhile, Russell continues to be super nice to homeless people.

-Why has Tina Fey been cast as the damsel in distress on the latest cover of Rolling Stone?

-Newly single Nicholas Hoult is getting his flirt on in Italy.

–Jennifer Aniston is the new face of Aveeno, which actually seems like a really good fit.

-Meanwhile, Katie Holmes is following Jen‘s lead and becoming the co-owner of a hair care company.

–Scarlett Johansson is getting good reviews for her latest Broadway role — and not just because she appears in lingerie.

–Kate Winslet and Mattias Schoenaerts have just signed on to a movie in which they’ll play Louis XIV’s gardeners. Yes, please!

-Uh oh.  Jonathan Coulton says Glee ripped off his “Baby Got Back” cover.

-The trailer for Red 2 has a whole lot of Helen Mirren holding machine guns, which is never a bad thing.