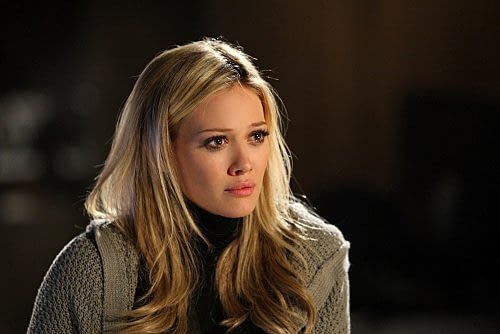 -Just days after pictures of their “romantic stroll” in a park surfaced, Hilary Duff and Mike Comrie have announced their separation after three years of marriage. Remember how she, uh, commemorated his proposal? I’m guessing this milestone was a different story.

-Congrats to the impossibly gorgeous Jesse Williams, who just welcomed a baby girl. (The fact that his wife is a totally normal-looking real estate broker somehow makes him even more attractive.)

–Aaron Sorkin is dating Courtney Love? How does one go from seeing Kristen Davis to that trainwreck?!

-Finally some good news for Amanda Bynes: her bong-tossing case may be dismissed.

–These pictures of Anne Hathaway screaming for help while caught in a riptide in Hawaii are pretty terrifying.

–Leslie Mann got super sentimental and teary when appearing for the last time on Jay Leno‘s show, and it was awkward.

-The cast of Orange Is The New Black looks amazing in Elle’s super glam photo shoot.

–Judy Blume and Lena Dunham want you to take a break from your screens and read some books already.

-Meanwhile, Donald Glover says Lena Dunham is playing all of us (and winning).

–Aubrey Plaza kind of bugs me (like when she refused to be interviewed about Parks & Rec’s 100th episode), but Anna Kendrick is friends with her so she can’t be all bad.

-I can’t get enough of Josh Malina‘s Twitter feed, but this photo he just posted of Bradley Cooper might be my favourite tweet of his ever.

-Game of Thrones is teasing scenes from their new trailer on Vine. No Brienne and Jaime? Fail!

–Zac Efron is all about sex on the first date, y’all.

-Here’s a scene from Spoils of Babylon. From all the reviews I’ve read, it seems like the cast had more fun making it than everyone’s having watching it.

-Is Lindsay Lohan up to her old tricks again? This may explain some recent not-so-blind blind items.

-The upcoming Veronica Mars will make debut its at SXSW. A new poster has also landed.

-In news that will surprise no one, Justin Bieber egged his neighbour’s house.

–Miley Cyrus‘ video for “Wrecking Ball” has been banned from French TV before 10 p.m. That’s right — Miley Cyrus is too skanky for FRANCE!

-The always awesome Joseph Gordon-Levitt talked about his mom teaching him to be a feminist on Ellen this week.

-Expect Lupita Nyong’o to wear Miu Miu at the Golden Globes this weekend. Her new campaign for them is stunning.

-A ranking of every character in the Buffy universe seems like a lovely way to kick off a weekend, don’t ya thing?

–Bryan Cranston is going for Heisenberg in the trailer and new clip from Cold Comes the Night.