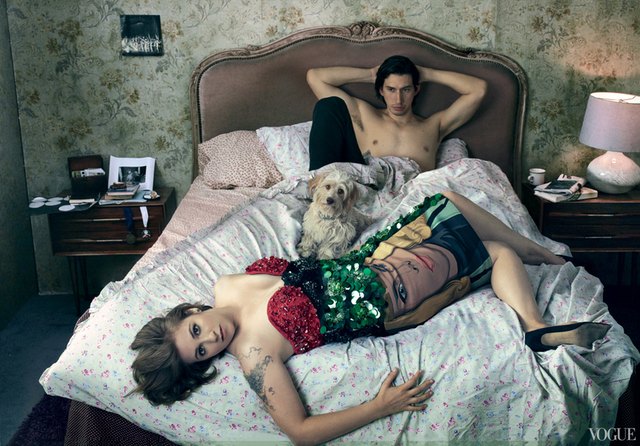 -Well, this has certainly taken a turn. Jezebel is offering $10k for untouched photos from Lena Dunham‘s Vogue photo shoot, which has led to lots of interesting discussions about what part of feminism says you can’t be OK with being retouched by Vogue?

-Meanwhile, the Vogue cover has clearly rubbed off on Lena Dunham. She looked lovely last night.

-There weren’t too many shocking snubs in this morning’s Oscar noms, though I am bummed about Tom Hanks (those last five minutes of Captain Phillips have stayed with me longer than any other movie sequence this year — save maybe Gravity’s opening), and “Please, Mr. Kennedy” (and I didn’t even like that movie!).

-College Humour nailed it with their honest movie posters for this year’s nominees.

-Meanwhile, I love that Matthew McConaughey didn’t pull the tired, old “oh, I forgot all about nomination day! My agent woke me up with a phone call” schtick, instead admitting that he had the family gathered around the TV.

-Leave it to the always classy Sarah Polley to have the best reaction ever to not getting nominated in the Best Documentary category for Stories We Tell.

-There are a whole pile of romance rumours surrounding the new Oscar nominees. Lupita Nyong’o has everyone whispering after she posted a photo with Jared Leto (actually, all of her photos from the Golden Globes are amazing). Her fellow best supporting actress nominee Sally Hawkins has been spotted with Colin Farrell. And Michael Fassbender is reportedly dating Madalina Ghenea.

-Speaking of Lupita Nyong’o, did Vanity Fair lighten a photo of her?

-On The Graham Norton Show, Jonah “I’ve Been Nominated for an Oscar Twice Now” Hill told a story about how a bathroom incident kept him out of the mile-high club. On a completely unrelated note: I love Carey Mulligan‘s hair in that clip!

–Kaley Cuoco‘s new husband has her name tattooed on his arm, which is probably a really great idea for someone he met five months ago.

–Justin Bieber may be deported back to Canada? But we thought we’d gotten rid of him!

–Kylie Jenner has come to Justin’s defense, so I guess he’s got that going for him.

-The official Batkid video has been released. So many feels, guys.

-There are a lot of great-sounding films coming to Sundance this year — including not one, but two starring Anna Kendrick (Happy Christmas with Lena Dunham, and The Voices with Ryan Reynolds). Kristen Stewart‘s Camp X-Ray also sounds great, as does the rom-com satire They Came Together, starring Amy Poehler and Paul Rudd. This clip made me laugh.

-On the other hand, I’m not sure if a romantic remake of 1984 is Kristen Stewart‘s best career move.

–Jenny McCarthy wanted to be The Bachelorette but ABC, in a brief moment of lucidity, rejected her.

–Kate Gosselin and her 13-year-old twin girls were interviewed on the Today Show this morning and it was totally cringe-worthy. They clearly hate their mother.

-As if she wasn’t already a geek’s wet dream, Gillian Anderson announced that she’s writing a sci-fi series.

-I really hate what Keira Knightley wore to the Jack Ryan premiere. That’s what you wear to afternoon tea with your mother-in-law, not to the premiere of your hot new action film.

-Um, did you guys know that Pacey is coming back to our TVs?

-In other TV news, HBO’s Looking is getting rave reviews. It debuts this weekend.

-I’m in no way surprised or outraged by How I Met Your Mother’s yellow-face controversy, but maybe that’s just because the creators of that show are so obviously tone-deaf about everything these days.

–Gisele Bündchen’s latest mouth bomb: “I don’t even own a hairbrush.”

-Did Tom Hiddleston just tell us Jaguar is his car of choice when you have to hide a dead body?

-The rumours that Ashton Kutcher is prepping his proposal to Mila Kunis continue to heat up.

-At the premiere of his new film, Dan Stevens reportedly refused to answer questions about his old show Downton Abbey. (More like Downton Crabby, amiright?!)

–Uma Thurman told everyone who would listen at the Golden Globe after-parties “I need a job.” Classy.

-I don’t watch American Idol but every TV critic I follow loved the premiere (which seemed to have a lot to do with Harry Connick Jr., who cradled a contestant like a baby). The ratings weren’t so hot, though.

–Cameron Diaz wants to tell you all about her poo.

-To promote the Veronica Mars movie, they’re creating a limited web series featuring Ryan Hansen (Dick) trying to capitalize on the film’s heat to land his own series. I’m so in.

-The other great thing about a Veronica Mars movie is that Jason Dohring gets to do press again. “I think I was in love with [Kristen] for the three years we made that show.” Swoon.

-I’m glad I’m not the only one who thinks Parenthood is in a suck spiral this season.

-The kid who plays King Joffrey on Game of Thrones really doesn’t like fame.

–Miley Cyrus and Kellen Lutz had a “quick fling” but now it’s over and the world wept.

–Elizabeth Banks is stuck on an epic Walk of Shame in her new movie trailer. It looks cute. Too bad it doesn’t even look like her on the movie’s poster.