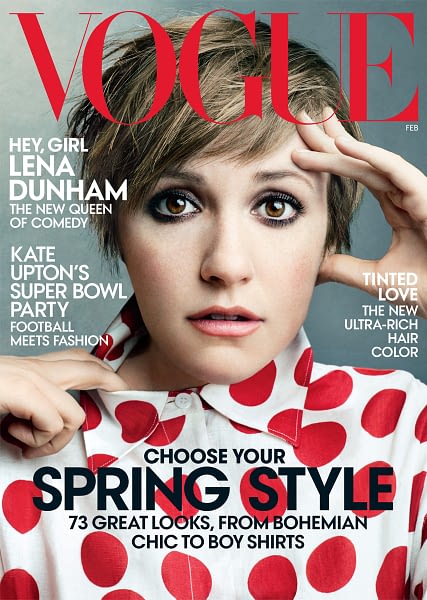 -I very much like Lena Dunham’s Vogue cover and the accompanying shots (especially, oddly enough, the pigeon one). There’s also one of her wearing a bulky coat, which will no doubt lead to a Melissa McCarthy-esque controversy.

-Speaking of Vogue, Rihanna was photographed posing for a Vogue Brazil photo shoot, and shirts were clearly not a priority.

-Wow. This is not a dress I’d usually like, but Anna Kendrick is stunning in it!

–Beyoncé‘s essay on gender equality is now available online to read and gush over.

-Is Miley Cyrus’ new haircut *supposed* to remind us of Jim Carrey‘s Dumb & Dumber ‘do? If so, it’s a smashing success.

-Meanwhile, Shia LaBeouf did not appreciate Jim Carrey’s joke about him at the Golden Globes. Weird — he seems like such a laid-back, fun-loving dude.

–Rupert Grint talked about costarring along Shia LaBeouf: “He smashed the place up, got naked and kept seeing this owl. If anything will make you not do drugs, it’s watching that.”

–Ashley Olsen is single again after splitting from her CEO boyfriend.

-Has Johnny Depp proposed to Amber Heard? That’s the rumour — and she’s certainly fueling speculation with her ‘don’t look at me!/please look at me!’ antics.

–Johnny Depp is leading the Razzie Awards, tied with Naomi Watts for most nods.

–Conan O’Brien responded to reports he fathered an illegitimate child by joking about it on Twitter.

-Speaking of denials, Josh Duhamel is calling bullshit on reports that he’s the Yoko Ono of the Black Eyed Peas.

-I like Drake’s SNL promos, especially the one that references Degrassi.

-Is Stephen King trying to salvage Under the Dome? He’s writing the first episode of season two, and he’s promising two major deaths.

–Justin Timberlake was nice this one time so I guess we should lay off him — for now.

–Kim Kardashian might file a police report against the heckler Kanye West is accused of punching.

–Emma Watson is already in the ‘meet the family‘ phase of her new relationship.

-I’m upgrading to a new DVR at the end of the week, which means there’s a lot of pressure to clean out my current one. I finally (finally!) finished the last season of Happy Endings last night, and it left me wondering if the show would have paired Penny and Dave if it wasn’t canceled. It turns out the creator had much crazier plans.

-The next time I’m stuck waiting in a line, I’m going to read this oral history of Hoop Dreams.

–Adam Scott is recreating another classic TV theme song, this time with Paul Rudd. I can’t tell from the photo what it’s going to be. Bosom Buddies, maybe?

-Wait until the Beliebers hear what Joel McHale said about him on Conan last night.

–Hilary Duff was spotted without her wedding ring, which is what usually happens after you announce your separation.

–Bruce Springsteen and Jimmy Fallon teamed up last night to mock Chris Christie and it was hilarious.

Nicole Kidman Gets a Make-Under for Top of the Lake

The Serial Podcast Ends Next Week