-HBO Max didn’t send out the first four episodes of the Sex and the City reboot screeners to critics until very late (and didn’t seem to provide clips to talk shows) which is probably not a good sign. The first couple of episodes have now dropped and the reviews aren’t great, with lots of talk about the show’s “disarming new seriousness.”

-Wow, am I confused by Jessica Chastain‘s repeated attempts to “defend” Jeremy Strong from that NY Mag profile. The writer spent months with him (unheard of in this day and age) and the result was a balanced, nuanced profile. Yes, he is clearly a very intense guy but this is an actor who also once said that he tore up one of his only remaining photos of his mother to get into the right mindset for his role in The Judge, so I don’t think he was mischaracterized.

-Meanwhile, this is the best piece I’ve read about all the reactions to that Jeremy Strong profile.

–Travis Scott spoke about the Astroworld tragedy for the first time in interview with Charlamagne Tha God. “I just control what I can on the stage, and then you have the professionals to control what they can in the crowd. It’s just hard because as an artist you want to have the best shows and you want to have the best experiences so you link with professionals to handle that side of it.”

–Olivia Rodrigo has been named Time Magazine’s Entertainer of the Year.

-At his girlfriend’s urging, Jonah Hill used his time on Jimmy Fallon‘s show to talk about climate change.

-HBO Max’s Station Eleven adaptation is getting good reviews (with comparisons to The Leftovers) but man, I just can’t imagine diving into a story about life after a pandemic wipes out most of humanity. 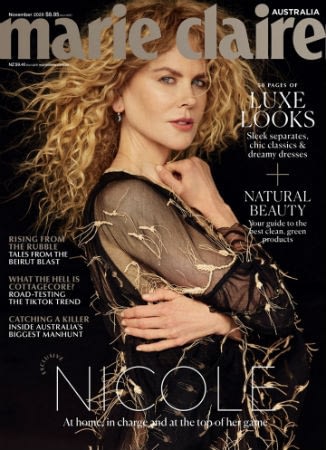 –Nicole Kidman covers the new issue of Marie Claire Australia and I am fascinated by her hair. This is also what I spend my entire time thinking about when watching The Undoing. The show is just ok but the hair is glorious. Is it a wig? Extensions? No way it’s this thick at 53, but however she’s doing it, it’s amazing.

-Kidman’s Undoing costar Hugh Grant told Stephen Colbert that he had covid in February. Of his symptoms he said “I kept breaking into a terrible sweat. It was like a poncho of sweat. Bit embarrassing, really. And then my eyeballs felt about three sizes too big, and a feeling as though an enormous man was sitting on my chest. A Harvey Weinstein or someone.”

–Britney Spears lost her court appeal to remove her father from overseeing her estate. Her lawyer said: “(Britney) has informed me that she is afraid of her father. She will not perform again if her father is in charge of her career.”

-It looks like Brian Austin Green‘s camp is feeding quotes to Us Weekly about how Megan Fox is “unpredictable and inconsistent.” Ugh.

-Food Network host Alton Brown seems to be having a rough go of it lately. His pre-election rants seemed slightly unhinged, and now he’s had to apologize for a tweet he posted last night referencing the Holocaust.

-Meanwhile, Larry David‘s daughter says he comforted her following her brutal breakup with Pete Davidson by yelling “Cazzie, come on! YOUR ANCESTORS SURVIVED THE HOLOCAUST!”

-It seems kind of wild to me that details of the Hillsong pastor’s affairs are getting such media play, but that’s where we are in 2020.

–Rupert Grint joined Instagram yesterday and his first pic was a a selfie with his 6-month-old baby girl. Harry Potter costar Tom Felton was quick to welcome him.

–Selena Gomez will star in a biopic about gay mountaineer and social entrepreneur Silvia Vásquez-Lavado.

-George Clooney has been selected to receive top honors during the Museum of Modern Art Film’s virtual benefit.

-The Gossip Girl reboot cast was photographed filming on the steps of the Met. Dammit, I think I want to watch this now.

-Woof. The Irish accents in the Wild Mountain Thyme trailer are something else.

–Gal Gadot covers Vogue, and though she doesn’t address her much-ridiculed “Imagine” video, she does talk about meeting her husband: “In the desert at this chakra/yoga retreat type of party. And he was too cool for school. Like, we were in the same group of friends but I didn’t know him and he didn’t know me. And something happened kind of from the first moment we started talking. When we got home, I was like, ‘Is this too early to call you? I want to have a date.’ Then we go out, and by the second date he told me, ‘I’m going to marry you. I’m going to wait for two years, but we’re going to get married.’ I was like, ‘Fine.'”

-In a new chat with Amy Schumer in Interview, Selena Gomez talks about how tabloids would spin it every time she stepped away from the spotlight. “The way the media has sometimes tried to explain things has made it sound really bad, when in reality there’s nothing wrong with the fact that I needed to go away or that I fell in love. I had to start opening up because people were taking away my narrative, and it was killing me.”

-Actors Manny Jacinto, Lucas Hedges, Glen Powell and more sent GQ photos of their fave outfits. Is it just me, or do they all seem to be quarantining with professional photographers?

–Diddy hosted a celeb-packed dance-a-thon to raise money for healthcare workers and his ex Jennifer Lopez made an appearance (she still calls him “Puffy”). But Diddy was not here for Lizzo‘s performance and cut it off early. “It’s Easter Sunday. Let’s play something a little bit family friendly.” He later clarified: “When I stopped the music it was because it had a lot of curses in there. Not because she was twerking. She’s one of the best twerkers in the world.”

-Speaking of charity IG Lives, Rihanna did one and warned fans to quit asking about new music. “If one of y’all motherf–kers asks me about the album one more time when I’m trying to save the world, unlike y’all president… on sight.” She’s not wrong.

–Justin Timberlake is in Montana with his family, and says that parenting 24 hours a day is “not human.” They have one child.

-The SNL at-home episode was odd, but I did really like the Zoom sketch.

–Kristen Stewart‘s girlfriend, screenwriter Dylan Meyer, celebrated Stewart’s milestone 30th birthday with a sweet Instagram post, writing “It’s a short ride on this earth, spend your time with someone that inspires you to be the best version of yourself and lights your shit on fire.”

-These videos people are making pretending to be Madonna’s assistant will never not make me laugh.

-In case you need a little Monday pick me up, here are the staged rowing photos that Lori Loughlin allegedly used to get her daughters into college.

-This article on the weaponized niceness of Ellen Degeneres is worth your time. In completely unrelated news, here are some very unstaged photos of her delivering PPE to a fire station.

-I watched the Tiger King reunion special so you don’t have to.

-My favorite part of this interview is when Ellen Pompeo is pretty blunt about how she preferred the early seasons of Grey’s Anatomy. “The show back then was just so, so, so, so good. I wish we had an appreciation for it then about how good it was. I don’t think we did, I don’t think any of us did. There was too much shit going on. It was too big, it was too hot, it was too fast and there was just so much going on in the beginning…I wish we had appreciated it for really how good it was, because — man, the show was fantastic back then.”

-Someone posted Black Widow’s alternate death scene from Avengers: Endgame. What a better way for her to go out.

-Man, some celebrities need to step away from Instagram Live during quarantine. Stephen Amell did a charity one last night and he was visibly drunk and slurry.

-During an interview for Meghan Markle‘s issue of Vogue, Dr. Jane Goodall reveals that Prince Harry hinted at the royal split last summer when she met baby Archie. “I made Archie do the Queen’s wave, saying, ‘I suppose he’ll have to learn this’. Harry said, ‘No, he’s not growing up like that.’ ”

–One Direction fans are losing their poo at rumours of a possible reunion show.

-Here’s the trailer for season 2 of Dead to Me, which returns to Netflix May 8.