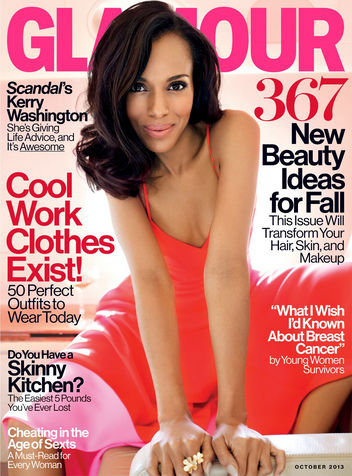 -I love that Kerry Washington is getting all the magazine covers now. Besides the Glamour cover above, she’s also gracing the new Flare. Finally!

-Need a reason to call your mom? Dakota Johnson and Charlie Hunnam have been cast in the Fifty Shades of Grey film.

-I’m not sure how I feel about seeing Dakota Fanning’s side boob. Not good, I think.

-HBO announced that True Blood’s next season will be its last. Talk about coming two seasons too late (though the show did briefly rally this year, but topped it off with a redonkulously stupid finale).

-I usually love everything Emma Watson wears but this is just…no.

–Britney Spears‘s new album will be titled “Werk Bitch“. I really hope she doesn’t add a ‘t’ to the beginning of that.

-Meanwhile, even Stephen Harper is twerking (or at least thinking he is).

–JLo and Harry Connick Jr. are officially on the Idol train.

-Lots of bold-faced names attended Seth Meyers’ weekend wedding. I really hope Amy Poehler was there and that she have a “Really?!”-themed speech.

–Michael Douglas is downplaying his marriage woes, saying he and Catherine Zeta-Jones are “fine.”

–Ed Sheeran has come to Taylor Swift’s defense, saying that STFU she was seen mouthing at the VMAs was actually directed at Selena Gomez.

–Miley Cyrus spoke about her VMAs performance and said “I didn’t even think about it ’cause that’s just me.” That sounds about right.

–Dina Eastwood is saying lots of nice things about her soon-to-be-ex-husband Clint. I guess the settlement hasn’t been finalized yet.

-Did Katy Perry say no to John Mayer’s proposal?

–Jennifer Lopez says she has “high standards” when it comes to love. I think the guy’s face in the background of this photo encapsulates what we’re all thinking right now.

-It was a big weekend for engagements. Katie Couric and Lance Bass are both getting hitched. Though not to each other, as cool as that may be.

-A trailer for the new season of Downton Abbey has landed.

–Amanda Bynes is back to tweeting about Drake (though her lawyers insist she was “hacked” again).

–Bill Murray is ready to rock the casbah.

–Zac Efron is having quite a week. His TIFF film Parkland is getting rave reviews…as is his chest in the new Neighbors trailer.

Gillian Anderson Talks About Getting Paid Less Than David Duchovny