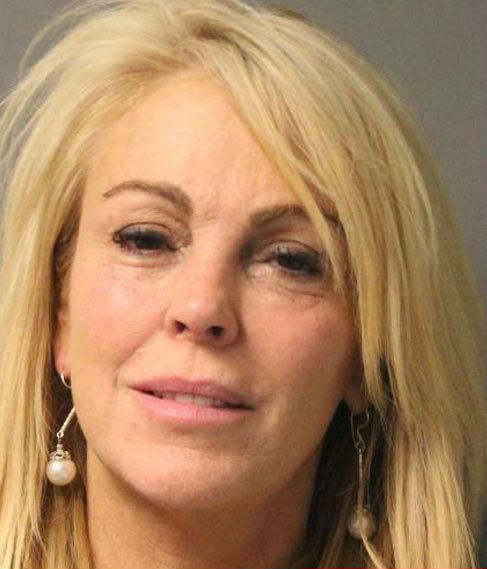 -Looking at Dina Lohan’s mugshot is like peering into Lindsay‘s future.

–Nicole Kidman was knocked to the ground by a paparazzo on a bike. She’s considering pressing charges.

-Julianne Moore will play President Alma Coin in the next two Hunger Games movie. I really like this casting.

–Sara Gilbert says she realized she was gay while dating Roseanne costar Johnny Galecki, and he was awesomely supportive of her.

-Remember those reports of Russell Brand being kicked out of the GQ Men of the Year Awards for his Nazi comments about Hugo Boss? Now there’s video of his speech — and it’s amazing.

–Selma Blair is not thrilled that Charlie Sheen fired her for criticizing his work ethic.

-Parks and Rec’s Adam Scott and Retta have lots of thoughts about last week’s Breaking Bad.

-Speaking of the Parks and Rec cast, Amy Poehler calls herself a twerking mother.

–Aaron Paul is all kinds of adorable in this video interview with Vanity Fair. I’m digging the facial hair.

–Miley Cyrus is a brunette now.

-The always-amazing Emma Thompson throws shade at actors who think they are ‘above’ promoting their work, and shows ’em how it’s done at TIFF.

-Speaking of TIFF, Liam Hemsworth may have made out with a mysterious brunette when he was here supporting his brother. I didn’t hear that one, but I did hear that he was randomly introducing women to his mother.

-Thanks for Sharing debuted at TIFF a year ago, and it’s just coming out now. I remember hearing really good things about the Pink/Josh Gad subplot. Here’s a clip.

–Aisha Tyler gave me lots of feels when she talked about her fertility issues.

-Is The View trying to add some credibility following its Jenny McCarthy addition but courting Katie Couric?

-Here’s the first trailer for Homefront, a movie that was written by Sylvester Stallone and pits Jason Statham against James Franco. I’m so confused by all of those words.