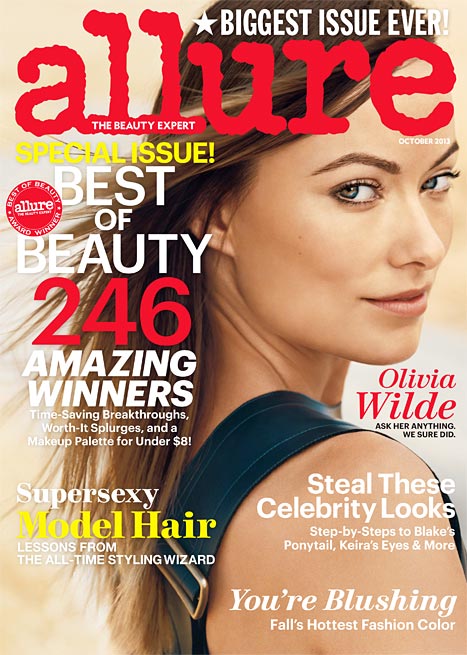 –Olivia Wilde looks beautiful and fresh-faced on the cover of Allure, where she talks about falling for Jason Sudeikis, and asking Jennifer Aniston for advice on dealing with fame. I’m really starting to dig this girl; she was lovely at the Rush premiere, she’s winning raves for her improv skills in Drinking Buddies, and my buddy who interviewed her at TIFF said she was the most articulate, nicest celeb he’d talked to all week.

-Speaking of Jennifer Aniston, she made fiance Justin Theroux ditch his STD-themed artwork, for some crazy reason.

-This came as a surprise: Zac Efron reportedly completed a stint in rehab earlier this year. Good on him for dealing with it under wraps.

-I very much liked the dress Gwyneth Paltrow wore to the Thanks for Sharing premiere.

-Speaking of sharing, Gwyneth talked to Chelsea Handler about nudity and eating Chick-Fil-A.

–Cher turned down the chance to perform at the Russian Olympics because she knows which side her bread is buttered on.

–Alicia Keys likes to party so much, she’ll do it in your kitchen.

-I was late for work today because I couldn’t drag myself away from the Britney Spears interview on Good Morning America. She was clear-eyed and giggly, talking about her first kiss (with Justin!), her split from Jason Trawick, and Miley Cyrus’ VMA performance.

-Here’s your daily excuse to cry.

–Andy Samberg is having a big week. His new show debuts tonight, and there’s rumours he’s getting hitched to Joanna Newsom this week.

-Speaking of new shows, Showtimes’ Master of Sex is the one everyone is raving about, and you can already watch the premiere online for free.

-Sleepy Hollow premiered to big ratings last night (though this early in the season, that doesn’t mean much).

–Robert Pattinson says he’s “quite sensitive” in relationships and that he loves “doing a bit of grandly gesturing.” You know what’s a grand gesture? Not letting your ex be scapegoated as the only unfaithful person in that relationship. I mean, um, nothing.

–Amy Poehler turns 42 today. How come there’s no national holiday or something?

–Stephen Amell and his cousin Robbie talk about taking over the world (or at least The CW) in a new interview.

–Madonna did a Reddit AMA yesterday, and is set to release a new 17-minute short film next week.

-How awesome is it that Kerry Washington is the reigning cover queen this summer?

-Ben’s wife Jennifer Garner is heading back to TV as a soccer mom who inherits a male strip club, which sounds goddamn perfect. This is such a good career move for her; I always thought she was much more suited to TV than movies. (Do you remember her in Alias? I feel about the first few season of that show the way Emily Nussbaum feels about Sex and the City.)

-Here are 16 amazing details you may have missed in this season of Breaking Bad.

-A creepy dude pretended to be Justin Bieber online and convinced teen girls to strip for him on camera.

-Meanwhile, Justin Bieber doesn’t know where he is.

-I love that Piper Perabo admits to eating at The Burger’s Priest when she’s shooting Covert Affairs in Toronto.

-One very happy bride got to meet Brad Pitt in the middle of her reception.

-The first trailer for Alexander Payne’s Nebraska has landed. It got big buzz in Cannes.