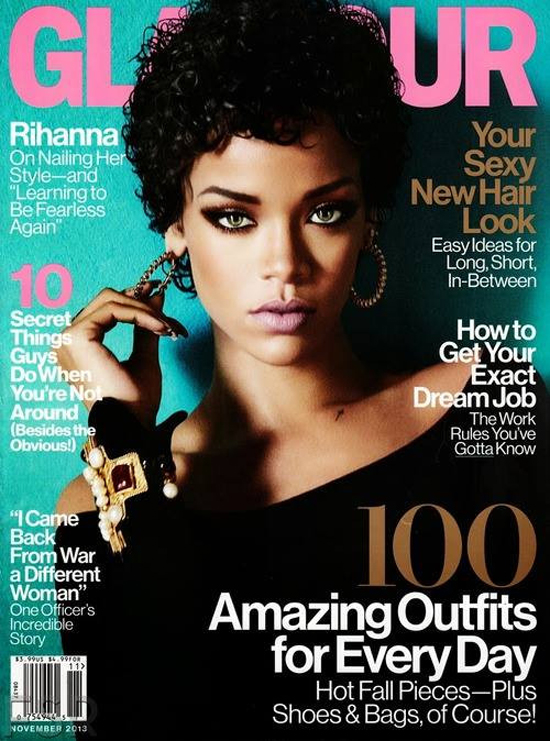 -I’m really digging Rihanna’s hair on the cover of Glamour. Could have done without seeing her nipple in her new music video, though.

–Miley Cyrus says she just wants to have fun and “not think about any kind of repercussion.” One of those repercussions, however, is not an unplanned pregnancy. She’s laughing off rumours that she’s carrying Juicy J’s baby.

-Speaking of babies, a very non-pregnant Jennifer Aniston has emerged after weeks of belly bump speculation.

-In case you missed Tina Fey‘s episode of SNL, her Girls spoof was killer.

-Are Cameron Diaz and Benicio Del Toro hooking up? I don’t hate that idea.

–Kate Upton and Maksim Chmerkovskiy are trying to convince us that they’re “very serious” about their relationship, even though it’s only 0.0043 seconds old.

-Is Ashley Greene engaged to Liam Hemsworth’s BFF — or does she just want us to think she is?

-Even more exciting than the rumoured Jennifer Lawrence cameo, Billy in 4C is coming back for the Dumb and Dumber sequel!

-Who gave Jennifer Hudson permission to spoof Kerry Washington in Scandal? Even if it is for a PSA, she’s pretty terrible in it.

-Dammit if I don’t like Katy Perry’s new song!

–Scarlett Johansson talks about her fear of peeing in the middle of her Broadway show in the new issue of Interview.

–Kanye West was actually nice to some paparazzi, telling French photogs: “I understand you have to make a living.”

–Bradley Cooper and girlfriend Suki Waterhouse are still going strong; I’m still freaked out by how young she looks next to him.

–Amanda Bynes has moved from UCLA to a more posh rehab facility in Malibu.

-A new clip from Gravity has surfaced. It’s just a little over one minute long and already I’m sweating. This movie might actually kill me.

-Not surprisingly, the Breaking Bad finale pulled in ginormous ratings with 10.3 million viewers. (For perspective, last year’s finale earned 1.9 million viewers — and that was considered good.)  Also, it was also downloaded 500k times in 12 hours. Surprisingly, Homeland also came back to its best ratings ever. Revenge, Once Upon a Time, and The Good Wife all returned to low numbers.

–Bryan Cranston and Aaron Paul discuss the show’s ending in this new interview, and creator Vince Gilligan explains himself.

-Speaking of the finale, here’s our final Breaking Bad podcast ever. Sigh.