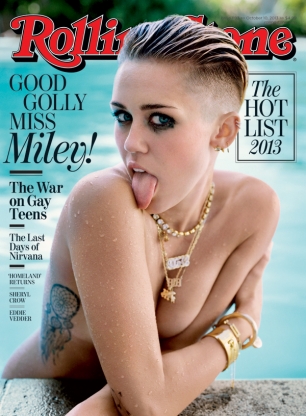 -A topless Miley Cyrus is licking herself on the new cover of Rolling Stone because why not? In the article, she says “Now people expect me to come out and twerk with my tongue out all the time. I’ll probably never do that s–t again.” Well that promise didn’t last long…

-Meanwhile, she Instagramed a photo of her latest tattoo, which she got on the soles of her feet. Ouchie!

-Remember when you watched the trailer for Nicole Kidman‘s new Grace Kelly biopic and thought “that looks terrible!” Well, the studio seemed to have a similar reaction. They’ve pushed the release date from November to next spring, taking Kidman out of this year’s Oscar race.

-As if we needed to feel worse about Jeff Daniels winning an Emmy, here he is in his Dumb and Dumber 2 costume.

–Ellen Pompeo was embarrassed by the lack of diversity at the the Emmys.

-This is why we shouldn’t let Real Housewife cast members land book deals. Here’s an actual quote from Melissa Gorgas‘ new book: “If your wife says ‘no,’ turn her around, and rip her clothes off. She wants to be dominated.”

-Hide the fans; Beyonce has already ditched the bob and returned to extensions.

-A vote for Leah Remini on Dancing with the Stars is a vote against Scientology.

-If you ever listen to Comedy Bang! Bang!’s podcast, you’ll know that Amy Poehler always kills it during the freestyle rap battle. She back at it, rapping about butter. (FF to 5:26)

–M.I.A. talked about NFL’s ridiculous demands that she pay $1.5 million for flipping the middle finger during the Superbowl halftime show.

-In news that will probably surprise no one, there’s reportedly video of Brooke Mueller smoking crack.

-The boys and girls at EW ranked every single Breaking Bad episode ever, which is both awesome and crazy.

–Drake’s new album officially dropped today. Do you have it yet? I’ve been listening to “From Time” on repeat all day. His new video for “Hold On We’re Going Home” also landed.

–Los Campesinos! has a new album coming out? Yes, please!

-In terms of new TV shows, The Blacklist and Sleepy Hollow are the early ratings winners. Hostages tanked last night, which means I’ll probably  wait to watch it until I’m sure it won’t be cancelled.

-In other TV news, FX has renewed The Bridge for a 13-episode second season.

-Aziz Ansari and Seth Rogen are brainstorming crazy product-placements for the release of a comedy special in this new video.

-The controversy surrounding Blue Is the Warmest Colour continues. Now the director says he doesn’t think it should be released because “it was too dirty.” I loved it when I saw it at TIFF (though I wouldn’t be too sad if they cut down the 10 minute sex scene).

-Sweet! The follow up to Lizzie Bennet Diaries, which is a modern adaptation of Emma, will premiere on YouTube Oct. 7.

–Kate Upton has never been more tolerable than when she was playing flip cup with Jimmy Fallon.