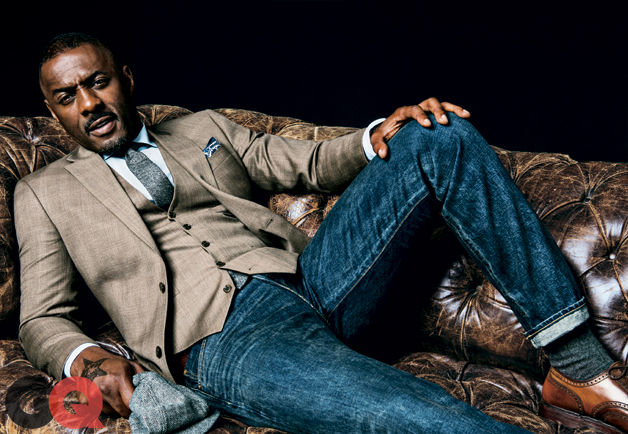 -GQ went to Ibiza with Idris Elba, and the resulting interview makes me love him even more. When he talks about being tricked by his ex-girlfriend into thinking he had a son? *sob* I needed to watch the behind-the-scenes video of him talking about how bowties give him hardons a few dozen times to cheer up.

–Justin Timberlake and Jessica Biel wore matching tuxedos to his Runner Runner premiere, cause gawd forbid she outshine him on his big night.

–Julie Chen insists she didn’t get a nosejob. Everyone with eyeballs disagrees!

-Now that Hugh Jackman is earning Oscar buzz for Prisoners (which I saw last night and thought it was amazing!), industry insiders are wondering if it’s time for him to retire Wolverine’s claws.

-It turns out reportedly Zac Efron went to rehab twice this year for his alleged cocaine addiction, once in spring and again after his comedy Neighbors wrapped.

–Miley Cyrus is topless on the deluxe version of upcoming album Bangerz because of course.

–Kate Winslet says she was never going to change her last name to Rocknroll so everyone needs to simmer the eff down.

–Bryan Cranston is breaking away from Breaking Bad. The actor has signed on to play blacklisted screenwriter Dalton Trumbo.

–Amy Poehler details what she looks for in a BFF: “Money, connections, power, sexiness, thick hair, fast cars, a sweet-ass booty, and a desire to travel.” Hmmm…I have 1 out of 8 of those things. Close enough?

-When Britney Spears met Miley Cyrus, she laughed hysterically — as one does.

–Solange’s new video once again will make you want to dance in public.

–Aaron Paul’s beard is getting a little too beard-y, but he was adorable on Jimmy Kimmel last night, revealing that he can tell the sex of a dog just by petting it, and talking about scary fans.

-Speaking of Breaking Bad stars, I talked about the last episode on the Canada.com podcast.