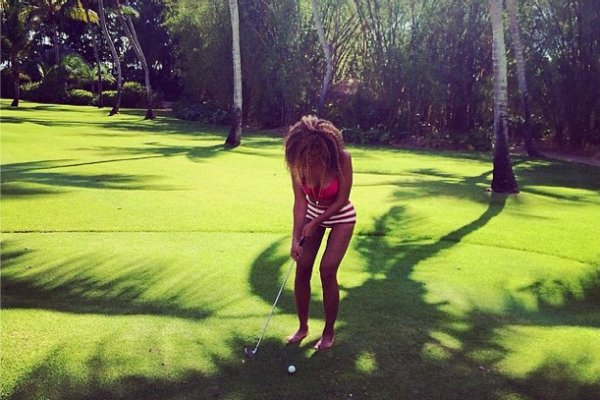 -Just when I thought the phrase “thigh gap” was finally fading from the lexicon, Beyonce goes and stirs it all up again with this terribly Photoshopped Instagram pic.

-This headline suggests that Andrew Garfield got “uppity” when asked about his relationship with Emma Stone, but I think he handled himself just fine in the video.

–Jimmy Kimmel sent Drake out on the street to interview people about how much they hate Drake.

-Speaking of Kimmel, he’s going to do a special episode following next week’s Scandal finale. In preparation, he aired the final segment of his telenovela Scandal spoof.

–I guess Justin Long and Amanda Seyfried are still a thing.

-I really liked this article on Jennifer Garner’s transition from ass-kicker to maternal figure (though I think she should go back to ass-kicker — maybe on TV).

-Watch Stephen Colbert talking about feeling sorry for whatever poor sucker ends up getting that Letterman job.

–Josh Charles was tweeting lyrics from my favourite Broken Social Scene song last night and I was worried my heart couldn’t take it.

-This casting breakdown story is perfection.

-Watch the first clip from Girl Meets World and join the rest of us in wondering what the hell happened to Ben Savage’s nose.

-Aw nuts. Allegiant is being split up into two movies. Not only does it suck that these transparent cash grabs are becoming a big trend, but Divergent hasn’t really been successful enough to justify this. Plus, the final book SUCKS.

–The Simpsons parody of those comically stingy Mad Men promos is great.

-Speaking of Mad Men, here’s a refresher guide in case you forget where last season ended up.

-The late Philip Seymour Hoffman hunts a terrorist in the new A Most Wanted Man trailer.

-It was a busy week for Reddit AMAs. Robe Lowe’s was “literally” perfect, and Peter Dinklage talked a lot about hummus — and took a question from the girl who played Hilary of Fresh Prince of Bel Air.

–Jack Bauer is back in the extended 24: Live Another Day trailer.

–Chris Martin is winning the PR war by looking incandescently happy in his first public appearance since the split announcement. Gwyneth, not so much.

–Minnie Driver quit Twitter after a photo of her in a bikini spurned a lot of hateful comments.

Dakota Johnson and Jamie Dornan Get Into Character for W