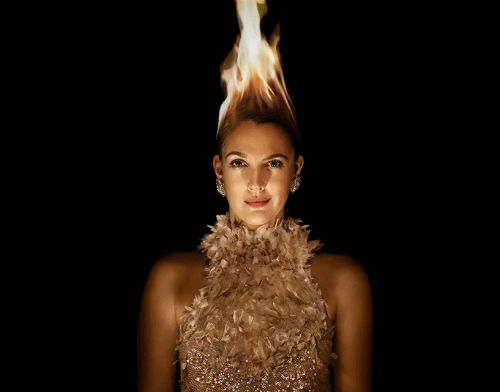 –Drew Barrymore is on fire (literally) for Harper’s Bazaar.

–Jimmy Kimmel grabbed a woman off the street and had Channing Tatum whisper sweet Valentine’s Day messages to her. I couldn’t even get through this; the secondhand embarassment factor was way too high. I would die. DIE.

-Here’s the first footage of the Friends cast on the James Burrows tribute. “Did you all sign contracts saying you wouldn’t sleep with each other?” Bless you, Andy Cohen.

-Meanwhile, Friends star Matt LeBlanc is co-hosting Top Gear and Britain is having none of it.

–Madonna‘s custody fight with Guy Ritchie is heating up. He’s ‘determined as ever’ for Rocco to remain in London.

–Rosie O’Donnell and James Corden rapped Hamilton’s opening number and it was wonderful.

–Kevin Smith‘s daughter was almost kidnapped by sketchy dudes posing as Uber drivers, and her dad tried to make her feel better by baking her a “sorry men suck” cake.

–George Clooney says his proposal was so “horrible” that it took Amal 20 minutes to figure out what he was trying to do.

-Meanwhile, I want George to only do joint interviews with Rihanna from now on. Please somebody make that a thing.

-Are you kidding me with this, Hollywood Reporter?!?

–Helen Mirren is defending the Oscars, saying “it’s unfair to attack the Academy” because “the issue we need to be looking at is what happens before the film gets to the Oscars…what kind of films are made, and the way in which they’re cast, and the scripts.” Well, she’s not wrong.

-Also, she just showed everyone how good she is at cracking whips because clearly she’s trying to kill us.

–Matt Czuchry is returning to the Gilmore Girls reboot? I love him in The Good Wife, but I’m Rory/Jess trash forever.

-My friend Kat wrote a thing on the 19 times Jacob Tremblay was Canada’s most adorable export, and it’s a delight.

–Lauren Cohan says she almost quit The Walking Dead over a gruesome death scene, but her TV husband talked her out of it. Glenn saves the day yet again!

-A Cruel Intentions TV show is happening. This…is not a good idea. I would maybe have a sliver of hope if it was on the CW, but NBC? Oh dear. Stay far, far away, Sarah Michelle Gellar.

–Anna Kendrick and Miles Teller deal with chronic underemployment and student-loan debt in the new trailer for Get a Job.

-Speaking of trailers, here’s the latest for Jean-Marc Vallee’s Demolition, starring Jake Gyllenhaal. This got lots of good buzz at TIFF.

Emily Blunt Opens Up About Motherhood

Hollywood Preps for the Oscars