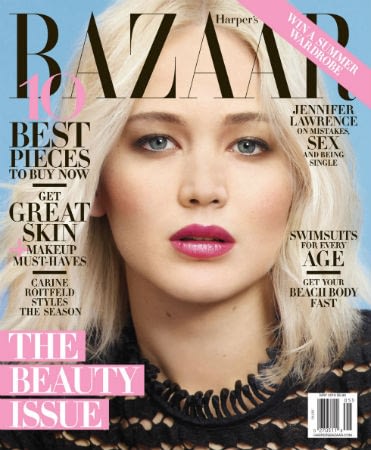 -I really like Jennifer Lawrence‘s new interview with Harper’s Bazaar, in which she admits she works hard for her “average” body. “Everybody says, ‘We love that there is somebody with a normal body!’ And I’m like, ‘I don’t feel like I have a normal body.’ I do Pilates every day. I eat, but I work out a lot more than a normal person.” She also smartly responds to the controversy over her pay gap comments, saying, “I try not to be too sensitive to the ‘poor rich girl’ jokes. I was saying my reality is absolutely fabulous, but it is not the reality of a lot of women in America.”

-Congrats to Anne Hathaway and Adam Shulman for welcoming a baby boy — and for doing it a month ago without anyone finding out. And for giving him a normal name. Really, they’re just winning at life right now.

–Melissa McCarthy’s deal to appear on Gilmore Girls just happened to go through the day before her critically panned movie opened. What are the odds?

–Kate Hudson talks about deliberately hiding from her children in her new InStyle cover story. Sounds like my kind of parenting.

-I’m actually surprised it took this long for Cameron Diaz to be featured in GOOP. She’s talking about the science of humans cells so at least it’s unintentionally hilarious.

-They’re once again trying to do a US remake of Misfits. Why, Hollywood? Whyyyyy???

-I’m really glad Edge of Tomorrow is getting a sequel. That is maybe the most underrated Tom Cruise movie in decades.

-This is the most Nic Cage thing that Nic Cage has ever done.

-If you just got let go from your steady TV gig and are looking for a new job, maybe don’t tweet support for an article that says the show will suck without you. Network execs see that stuff, fool.

-An oral history of Bridget Jones’s Diary from Renée Zellweger, Colin Firth and more? Well, if you insist.

–Paul Walker‘s 16-year-old daughter Meadow has received a $10 million settlement from the driver in the fatal crash.

-I really liked this week’s AV Club Q&A about body shaming in TV and movies.

-Brace yourselves for some shocking news: Leonardo DiCaprio is dating another model.

-How did I not know that there’s a movie version coming of The Office UK?

Arrow Bows Out with EW Cover