-What do you get the guy who has everything? Cardi B figured it out when she gave Offset his birthday present in public — a giant cheque for $2 million.

-In a new podcast, James Franco broke his four years of silence surrounding his sexual misconduct allegations. While he insisted his encounters were consensual, he did admit to sleeping with students in his film class, and said he had a sex addiction. “Over the course of my teaching, I did sleep with students, and that was wrong. But like I said, it’s not why I started the school and I wasn’t the person that selected the people to be in the class. So it wasn’t a ‘master plan’ on my part. But yes, there were certain instances where, you know what, I was in a consensual thing with a student and I shouldn’t have been.”

-Not surprisingly in light of recent allegations against him, Chris Noth‘s marriage is reportedly “hanging by a thread.”

-Actor Jay Johnston has reportedly been fired from Bob’s Burgers for attending the Jan. 6 insurrection.

-How was Denise Richards even allowed to board a plane without a mask?

–Jacob Elordi has reportedly moved on from Kaia Gerber with Olivia Jade (who I just realized are two different people).

-Selling Sunset couple Chrishell Stause and Jason Oppenheim have called it quits after just five months because they have different priorities when it comes to having children.

-This is an excellent oral history on the making of Scream.

-How cute was Keanu Reeves on Drew Barrymore‘s show? She also shared a lovely memory of him. “I was at this club, and it was my 16th birthday, and you came in — this is the memory I have of it, if you have anything to add or change, please let me know — you walked in, and you grabbed my hand, and you took me outside, and you put me on your motorcycle, and we drove at the warp speed of my life. We went and you took me on the ride of my life. And I was so free, I was such a free human being. And it was [this] moment where I just remember loving life and being so happy. I hold it so dear because the older we get, the harder it is to get to that feeling.”

-While Spider-Man’s insanely good box office returns is indisputably a big win for theatrical recovery, it also underscores that the massive divide between big, splashy tentpole films and everything else, a gap that was exacerbated by the pandemic.

–Tom Holland made good on his promise to bring a little boy who saved his sister in a dog attack to the Spider-Man set.

-Speaking of Spider-Man, I love all the praise Andrew Garfield is getting for his take on Peter Parker. They were my least fave SM movies, but I adored him and Emma Stone in them.

-Covid is messing everything up in Hollywood again, with a ton of productions and events getting cancelled.

-Wheel of Time is a hit (supposedly) for Amazon. 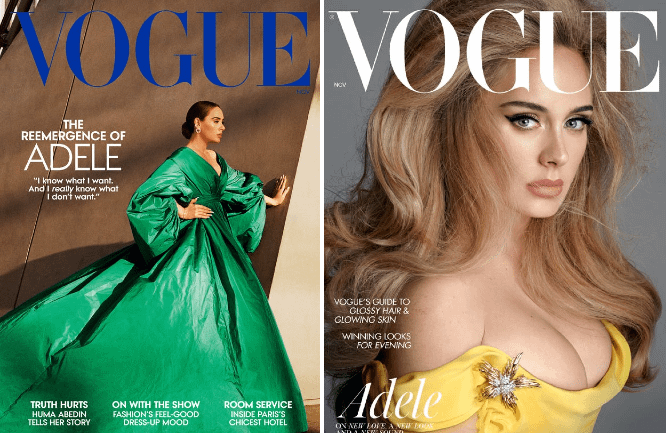 -For the first time in history US Vogue (left) and British Vogue (right) share a cover star: Adele. In her first interview in 5 years, she speaks about body image, romance, divorce, single parenthood and her “self-redemption” album.

-Comedian Hollis Black‘s comments on the special have been trending, while Dear White People showrunner Jaclyn Moore said of Netflix: “I will not work with them as long as they continue to put out and profit from blatantly and dangerously transphobic content.”

-Among Britney Spears‘ many posts over the last few days was this one, which she captioned, “I suggest if you have a friend that’s been in a house that feels really small for four months … no car … no phone … no door for privacy and they have to work around 10 hours a day 7 days a week and give tons of blood weekly with never a day off … I strongly suggest you go pick up your friend and get them the hell outta there !!!!! If you’re like my family who says things like “sorry, you’re in a conservatorship” … probably thinking you’re different so they can fuck with you !!!! Thankfully I found an amazing attorney Mathew Rosengart who has helped change my life 🌹!!!!”

-In another, she also commented about her seemingly bizarre posts, saying “I feel like I have been a caged animal for half of my life …that’s exactly why I choose to direct myself … do my makeup myself … produce myself … dress myself … make music myself … feed myself … and shoot videos and pics myself”

-There were a lot of delightful appearances on late night last night. Brett Goldstein was on Seth Meyers, Daniel Craig was on Jimmy Kimmel, and the cast of Squid Game was on Jimmy Fallon.

-Speaking of Squid Game, I loved this analysis of the marble episode (the best ep, IMO).

–Gabrielle Union says she once auditioned for The Matrix but she failed because she tried to channel Janet Jackson — and the real Janet showed up.

-The Crown’s Claire Foy is set to play Sheryl Sandberg in a new TV series about Facebook.

-Here’s the trailer for a new HBO doc that looks into the circumstances surrounded Brittany Murphy’s death.

–Nina Dobrev is catfished in the new Netflix movie Love Hard, and I’ll pretty much watch any romcom, but this trailer makes me worried that she’ll end up falling for her catfisher instead of the hottie from Never Have I Ever. Let’s all just rewatch Netflix’s excellent romcom The Half of It instead and call it a day.