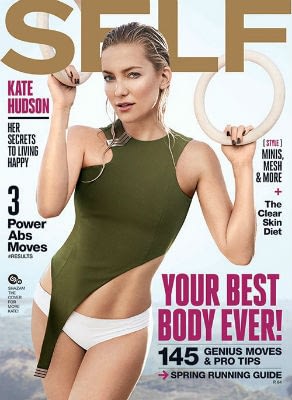 –Kate Hudson claims she eats 5 meals a day — but they all sounds kinda horrible. Whenever actresses talk about “indulging” and then it turns out that they mean only enjoying one really good meal a week, it gives my heart the sads. (On the plus side, I like how non-judgmental she comes off in this interview.)

–Jessie J says “my profile in America is that I’m kind of celebrated as one of the greatest singers.”  Gurl.

-The always awesome Samantha Bee talks about how she ensures the writing room on her new show is diverse: “The f*cking thing you have to do is just hire people.”

–Cuba Gooding Jr did NOT hold back when asked if he thinks Tom Cruise had cosmetic help. In other news, someone should probably swing by and make sure CGJ hasn’t been whacked.

–Rupert Grint doesn’t think Ron and Hermione would still be together because he hates happiness.

–Channing Tatum and Joseph Gordon-Levitt are set to star in an original musical comedy.

–Susan Sarandon has zero f*cks to give about Piers Morgan’s anger over her cleavage-baring SAGs outfit.

-Have we already seen the best Super Bowl ad? Cause this Hyundai ad with Ryan Reynolds living in Ryanville is boss.

-Speaking of Ryan, he did a Twitter chat that was pretty damn charming.

–James Franco is making a movie about Zola’s viral Twitter adventure. (Her momager’s quote in this story made my week!)

-Speaking of TV, I really like this article about how FX is doing #PeakTV better than any other network.

-I want to go to this Friday Night Lights reunion so hard!

-A single mom gets wooed by a hick in the new trailer for Julie Delpy’s Lola, much to her son’s dismay.

–Skrillex, A$AP Rocky and Justin Bieber all have cameos in the new Zoolander 2 trailer.

Oliva Wilde’s On Her ‘No Assholes On Set’ Policy

Doja Cat Is Putting Dr. Luke Behind Her