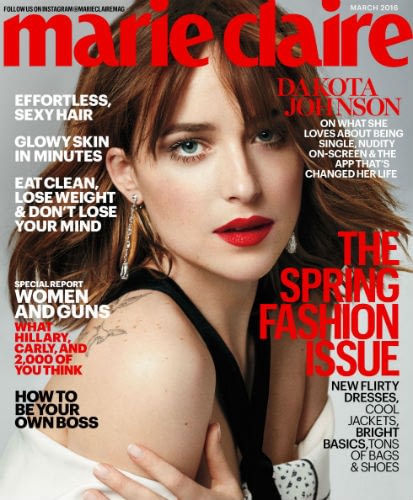 –Dakota Johnson looks lovely on the cover of Marie Claire, which totally makes up for the dress she wore to the How to Be Single premiere. In the cover story, she says she’s single and shoots down those relationship rumours surrounding her and Matthew Hitt.

-Speaking of premiere dresses, Jennifer Aniston has rarely topped any of my best dressed lists to begin with, but what the hell happened to her in the last year? Did she get a new stylist? And does that stylist hate her?

–Blair Underwood has signed on to star on one of The Good Wife’s final 9 episodes. That’s all well and good, but I wish they’d remember all the actors they had that just mysteriously disappeared. Remember Taye Diggs? Amanda Peet? The girl who played Robyn?!?

-The Flash ratings hit a 14-month high this week, which is awesome because I was starting to wonder if I should drop that show and last night’s episode totally turned it around. I mean, Barry was still a selfish asshat but whatever.

–Kate Winslet says she won’t boycott the Oscars because she “just couldn’t imagine not being there to support” Leonardo DiCaprio, which is actually pretty damn sweet.

-Guys, Idris Elba may be single! This is not a drill!!!

-Meanwhile, Ryan says fell in love with Blake Lively — while on a double date with someone else. Rude!

–Aaron Sorkin is adapting To Kill A Mockingbird for Broadway and Twitter reacted accordingly.

–Will Smith is worried that he and Jada may have been a little too hands-off with their parenting style. Gee, ya think?

–Hayley Atwell just landed the lead in a new ABC legal drama, which doesn’t bode well for Agent Carter’s chances. Yes, it’s not unheard of for an actor to book a pilot when they’re not sure if their existing show will be renewed, but the fact that it’s on the same network makes me think TPTB have already made a decision.

-A film producer spent the afternoon tweeting out terrible descriptions for female characters in scripts, and it was glorious.

-Wait, so Batman V Superman has to make $1 billion globally to be considered a success? Ruh-roh.