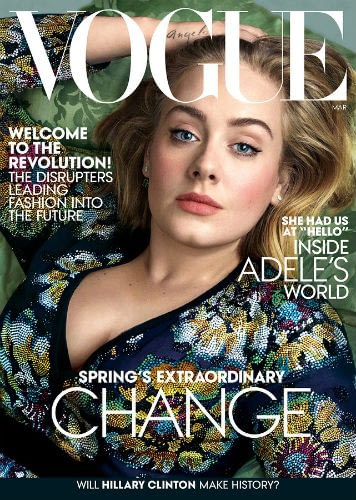 –Adele looks stunning on Vogue’s March cover. In the interview, she once again gushes about the Spice Girls and explains why she fights so hard for her son to remain unseen by the paps: “I think it’s really hard being a famous person’s child. What if he wants to smoke weed or drink underage, or what if he’s gay and doesn’t want to tell me, and then he’s photographed and that’s how I find out?”

-In his latest long and ridiculous Twitter rant, Kanye West said it was Taylor Swift’s idea to call herself a bitch who he made famous. She is all like “uh, hells no!”

–Diane Kruger joined Joshua Jackson at the opening of his new play and they looked all happy ‘n stuff. And she posted this on her instagram. But minutes earlier she posted this. And a couple of days ago she posted this. Goddamit Kruger, what are you trying to tell us??!?

–Selena Gomez has been friends “for years” with Jennifer Aniston? How? When? How?

-Well, this is total bullshit. Spike TV is ripping off James Corden’s carpool karaoke idea for a new show.

-Wait, now Liam Neeson is trying to walk back the best internet conspiracy of our time? Hard pass.

-Of course Emma Thompson has the most brilliant answer when asked about Oscar’s diversity problem. Why am I even surprised?

-There’s nothing I like better than reading TV critic Mo Ryan go after a showrunner *hard* in an interview when they make especially stupid character decisions. She felt exactly like I did after watching the last ep of The 100.

-Congrats to Alanis Morissette, who is pregnant with baby no. 2.

-God bless Gillian Anderson for trying to start an #agingwithoutshame hashtag. When we were watching the last episode, one of my friends commented how much better her breakdown scene was because she hadn’t effed with her face like most actresses her age.

–Alison Brie says she once peed her pants while filming Mad Men. Well, Jon Hamm does have a weird effect on female bodies…

-People magazine asked stars like Rachel McAdams, Kate Winslet and Brie Larson how they’d like to be remembered after they die. Way to kick the weekend off in the darkest way possible, People…

-This ‘shipping article spoke to my soul (and made me want to do an Angel rewatch.)

–OK Go’s zero-gravity music video is very cool, but the amount of pressure these guys must face every time they release a new clip makes me squirmy.

–Melissa McCarthy lets the insults fly in the new trailer for The Boss.

-Oh god. Garry Marshall is doing another one of those let’s-have-a-million-actors-be-in-a-holiday-movie thing. This one is called Mother’s Day and it features Jennifer Aniston, Julia Roberts and Kate Hudson.