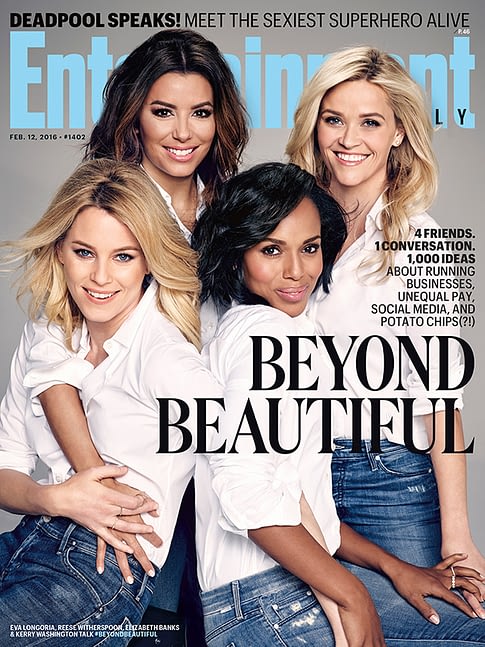 -The new EW cover story featuring Kerry Washington, Elizabeth Banks, Reese Witherspoon, and Eva Longoria is wonderful. They talk passion, persistence & parity — and Reese drops a mother of a blind item when she talks about turning down the girlfriend role of a “dumb comedy” a few years ago that two Oscar winners ended up doing. A Million Ways To Die In The West?  Mortdecai? Crazy Stupid Love? I’m DYING to know!

–Selena Gomez’s W cover looks like my Instagram photos when I try to filter them after one too many drinks. In the story, she talks Justin Bieber (“I got my heart broken”), her transition from a Disney princess to a pop star, her “feud” with Miley Cyrus, and her and Taylor Swift‘s love for eating at Chili’s.

-Meanwhile, the secret to George and Amal Clooney‘s successful marriage is talking? Sounds fake but ok.

–Stephen Colbert won’t let his college buddy David Schwimmer live down his bad Kylo Ren hair. Nor should he.

-Coldplay’s Chris Martin is the latest star in the hot seat for James Corden’s Carpool Karaoke.

-A new promo for The Americans has landed! God, I’ve missed this show.

-I’m not a huge Ryan Murphy fan (though I haven’t watched the OJ show, which everyone is raving about) but good on him for announcing that half of directors on his shows will be women and/or minorities.

-New photos from the Ghostbusters movie include our first glimpse at an adorkable Chris Hemsworth!

-I would never have expected ultra-private couple Naomi Watts and Liev Schreiber to open their home up to their home to Architectural Digest, but at least it’s pretty.

–Nina Dobrev is in Lip Sync Battle? I mean, I like her, but this seems like a different league than Tatum/Beyonce.

-The Flash is set to film a crossover on Supergirl, which I’m not sure I see the point of. Supergirl is kind of a mess, but it’s not like The Flash is going to bring in a huge audience. That show has good ratings by CW standards, but is dwarfed by anything on CBS. Plus, I can’t imagine any Flash fan who hasn’t already sampled SG…

-Here’s the first trailer of Miles Ahead, starring Don Cheadle as Miles Davis.

–Sam Claflin woos Emilia Clarke in the Me Before You trailer. I had a LOT of trouble with that book and the main character’s lack of agency/self-respect, but this cast might just  sway me.