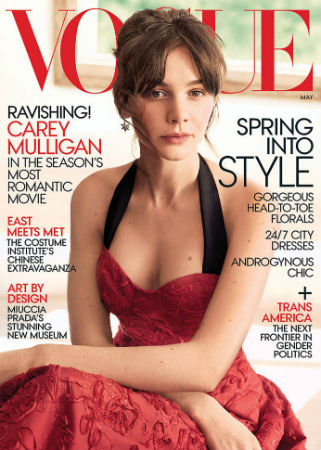 –Carey Mulligan is the cover subject of May’s Vogue, in which she gives a master class on how to be totally charming in an interview while giving away absolutely nothing about her private life. I heart her.

-Call off the search! The strange saga of “Where did Johnny Depp disappear to?” has finally ended. After reports that he failed to show up for his Pirates of the Caribbean shoot, he was spotted arriving in Australia with his wife.

-I love this roundup of the ridiculous way the media covers Kristen Stewart and her girlfriend. The word “gal pal” is getting a vigorous workout.

–Amy Schumer used her last appearance on David Letterman‘s show to fluster him with her “vagina.”

-Love is dead. Miley Cyrus and Patrick Schwarzenegger have split.

-I can’t get enough of all the Joss Whedon interviews floating around this week. (This interview is long, but one of my favourites of his ever.) He says Edgar Wright’s Ant Man was “the best script Marvel ever had,” and that he’s holding out hope for Dr. Horrible 2.

-I never did them in my 20s, but the deeper I get into my 30s the more  I seem to be doing shots. (Regressing, I know). In any case, I really can’t judge Gwyneth Paltrow for pre-gaming her high school reunion with Fireball.

–Madonna is denying those pesky rumours that she was texting during an off-Broadway performance of Hamilton.

–Mitch Pileggi is going to reprise his role as Walter Skinner in the X-Files revival. It’s all coming together, people!

-This is a great chat with Tatiana Maslany, in which she explains how she played a clone playing a clone on the Orphan Black season premiere. (Also, I love that she’s still taking acting classes.)

-The new Fantastic Four trailer heavies up on Michael B Jordan and my interest is *finally* piqued.