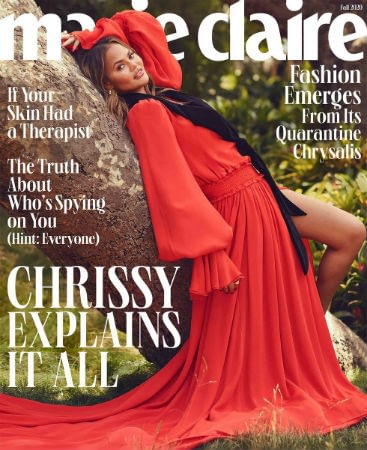 –Chrissy Teigen covers the new issue of Marie Claire and talks about stepping away from social media (“I’m barely online anymore, and that was at the request of my therapist. I didn’t start therapy until quarantine. I used to avoid it and make fun of the idea of it, and then I found the right person and it changed my world”), and voting out Trump (“People are very confident in their ways of being open about their racism because they have the backing views of the president. It’s become such a hurtful, weird presidency for so many Americans, and I’m going to fight to get this person out of office”).

-Whoa. The Kardashians just announced an end to their reality show. Love ’em or hate ’em, they changed reality TV, dominated every new social media app that sprang up over the 20 seasons they were airing, and ushered in influencer culture.

-The Crown star Emma Corrin talks about playing Princess Diana in British Vogue: “I feel I’ve got to know Diana like you would a friend. I know that sounds really weird, but I get a great sense of companionship from her.”

–Prince Harry and Megan Markle have paid back the renovations on Frogmore Cottage so they literally own the British people nothing and can live their life in peace without the UK press whining about them (at least, one can dream).

-Disney’s Mulan is facing a new wave of criticism for being filmed partly in Xinjiang, the region in China where Uighur Muslims are being detained in mass internment camps. This, on top of reviews from some critics who are questioning why an Asian director wasn’t chosen. This one was making the rounds today: “Were there any Asians on the creative team? An editor? A screenwriter? The composer? Anyone? I think maybe the make-up designer, plus a couple of producers looking to cash in. Whatever. Did I mention how tired I am?”

–Zac Efron has been living in Australia for a while, and he has been spotted holding hands with Australian model Vanessa Valladares. I’ve been watching his Netflix show and he kept mentioning how he needed to leave Hollywood so him hanging out down under and starting a new relationshipe? Love that for him.

–Dwayne Johnson thanked New Jersey first responders by outfitting the Ridgefield Fire Department in New Jersey with brand-new pairs of his Under Armour shoes. The donation came days after he announced that he and his immediate family all contracted coronavirus, and while their daughters bounced back quickly, he and his wife Lauren “had a rough go at it.” He said, “I could tell you that this has been one of the most challenging and difficult things we have ever had to endure as a family, and for me, too, personally as well. And I’ve gone through some doozies in the past.”

-A former children’s TV presenter in Britain has denied he is the elusive graffiti artist Banksy after a theory posted online went viral. I don’t know this guy but he looks like a Wiggle, which would make it hilarious if true.

-I adore Sarah Paulson but the trailer for Ratched on Netflix leaves me cold. Is it supposed to look like yet another season of American Horror Story?

-In celebration of #StarTrekDay, here’s the new trailer for season 3 of Star Trek: Discovery.

-Photographers discuss about what red carpets could and should look like when events return.

-Tenet did ok box office business in theatres. It’s a Nolan movie though, so the usual complaints about sound mixing remain.

-Another day, another recycled Venice outfit from Cate Blanchett.

-This is an interesting look at how the odd film festival season is going to make for an even more odd Oscar season, with indies expected to make more headway than usual.

-Speaking of festival movies that are gaining buzz, here’s the trailer for Nomadland starring Frances McDormand.

-Netflix has dropped the Rebecca trailer, starring Lily James and Armie Hammer. It’s been a while since I read the book but isn’t the second wife supposed to be “plain”? I’m not sure James qualifies. At least Kristen Scott Thomas seems to be having a blast as Mrs. Danvers.

Emily Blunt and John Krasinski Reflect On Their Big Year

Nicole Richie Gets a Quibi Show