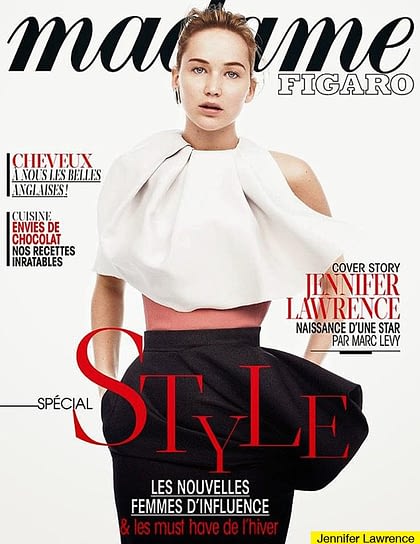 -Um, where did Jennifer Lawrence’s waist go on this mag cover?

-You should definitely stop everything and watch Sesame Street’s Hunger Game parody.

-Was Brittany Murphy poisoned? Just when you thought her story couldn’t get any sadder, there are some disturbing new toxicology reports that suggest both her and her husband had rat poison in their systems when they died.

-There is a very shaky rumour that Ryan Gosling might someday, maybe, possibly reunite with Rachel McAdams, and the internet is trying to pray it into being.

-Meanwhile, I really liked this interview with the lead singer of F*cked Up, remembering his time as a Canadian child actor working with people like Ryan Gosling and Donnie Wahlberg. “I learned a lot from Ryan about how not to be a little bitch…I did my best to ignore [Donnie] at all costs.”

–Alec Baldwin continues to be kind of the worst. He’s been suspended from MSNBC for his most recent homophobic and derogatory slurs. His daughter has jumped to his defense (she’s obviously gotten over the “little pig” comments he once made about her).

–Kanye West spoke at Harvard this weekend. He was “a bit self-conscious,” which is hard to fathom.

-Meanwhile, SNL’s skit on Kanye and Kim was less hilarious, and more sobering — mostly because we can all see it happening.

-Meanwhile, is this the saddest photo of Kimye ever snapped?

-Speaking of SNL, Lady Gaga was certainly game this weekend, but the results were pretty terrible. (Even this unaired sketch, in which she played a sea captain.)

–Olivia Munn and Stephen Merchant were spotted together in London, though it was probably work-related, as she’s still dating Holder.

–Judy Greer wrote a memoir? I now know what I want for Christmas!

-Another Buzzfeed feature I loved today: 18 Reasons You’ll Never Get Over Ben Covington From Felicity. (Though they missed the one about him whispering everything so you always had to lean in whenever he was onscreen. Sigh.)

–Kendrick Lamar was recently named Rapper of the Year by GQ, but the head of his label didn’t like the accompanying article, saying it was characterized by “racial overtones.”

–Russell Brand says he’s “in love” with Jemima Khan and has denied those cheating allegations.

–Christian Bale has lots of nice things to say about Batkid, while the cast of Arrow made him this cute video.

-Speaking of Arrow, CW is so confident in its Flash spinoff idea that they changed it from a backdoor pilot episode to a regular pilot.

–Jessica Alba pocketed $52 million to tell you about the organic lifestyle. Now seems like a good time to link to the New York Times’ recent takedown of celebrity lifestyle gurus.

-Just in case you need more proof that Cory Feldman is a whiny b*tch, read this dodgeball story.

-It appears that Paris Hilton has no idea what Chinese food is.

-If you need a reason to watch Sleepy Hollow (and you really shouldn’t because it’s awesome), tonight’s episode features Ichobad learning how to fist-pump!

-Apparently, if you want to steal a whole bunch of jewelry, just pretend you know Nick Cannon.

-Everyone’s pulling out the quote about Jake Gyllenhaal telling Taylor Swift that listening to her Red album was “bittersweet,” but the whole interview is pretty fascinating.

-What the hell is Christina Ricci doing in this Lifetime movie!?

–Shia LaBeouf is boasting about taking acid to prepare for an upcoming role — even though his character only uses ecstasy. (My favourite recent LaBeouf story came from June Diane Raphael on the Nerdist podcast, where she talked about seeing him at her gym all the time working out in jeans and a cowboy hat.)

-Thanks to a casting call for a body double, now everyone knows Britney Spears’ measurements.

-It’s so sweet of Eva Longoria to make sure we know exactly who she’s dating at all times whether we want to or not.

-There’s lots of stuff leaking from the Breaking Bad DVD extras today. The alternate Malcolm In the Middle ending is cute (if a bit too long), and the gag reel is great, but my favourite is the video of Bryan Cranston and Aaron Paul reading the final script for the first time. *sob*

-Speaking of BB alums, Anna Gunn just joined the US adaptation of Broadchurch.

-Also, a new trailer has landed for Aaron Paul‘s Need for Speed. I’m going to see this and hate myself for it.