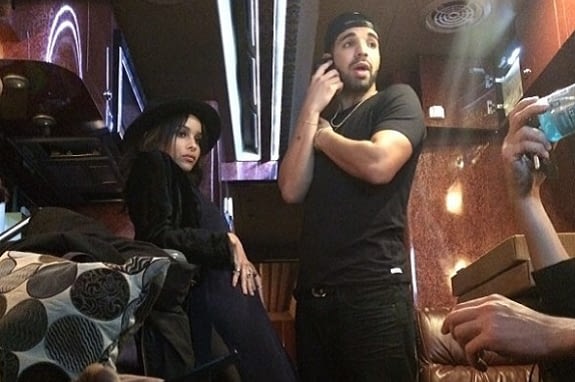 -Wait, Drake and Zoe Kravitz might be dating? But that breaks up two of my favourite fantasy couples in one fell swoop: Drake & Rihanna AND Zoe & Penn!

-Sorry, but not even your secret BFF Jennifer Lawrence can make the sheer dress trend work.

-Is there anything Brangelina can’t do? Their wine was just named the “best rosé in the world.”

-When I first watched the Kanye West video I thought “Finally! He’s learned how to poke a bit of fun at himself.” But the general consensus seems to be that this is a straight-up serious music video. If that’s the case, there aren’t enough eyerolls in the world (especially considering his recent performances of that song have been amazing).

-Who has more self control: Rob Ford or Alec Baldwin?

–Variety’s feature on Emma Thompson makes me love her even more, and I didn’t think that was physically possible.

-God bless Jezebel for scouring Reddit to find the best stories from groupies.

-Although I still can’t quite believe that Armani managed to confuse Alfre Woodard with Idris Elba, it did spawn a very funny meme.

-It sounds like Frank Darabont still isn’t over getting fired from The Walking Dead.

–Jennie Garth has split from the guy you didn’t know she was dating.

–Evan Rachel Wood has no interest in telling you her son’s name so just stop asking, ‘k?

–Kate Middleton says Prince George is “growing very fast,” which is exactly what all new mothers say. Do you think she also spams all of her friends’ Facebook feeds with baby photos?

-Betrayal has basically been cancelled by ABC, and I’d be surprised if Once Upon a Time in Wonderland comes back, either.

-Planning on attending Arcade Fire‘s upcoming tour? They want you to dress up like a fancy pants.

-Oddest headline of the day: “Coldplay’s Chris Martin DJ’d for Arcade Fire while disguised as a skeleton”

-Just in case you were wondering, Roseanne Barr is still utterly insane.

-This is disappointing: Daniel Day-Lewis‘ son appears to be a homophobic jerk who thinks he can rap.

-These Orphan Black credits in the style of Parks and Recreation made my entire day.

-Deadline owner Jay Penske is taking Nikki Finke to arbitration. Oh, to be a fly on that wall…

–Franz Ferdinand has a new video out. I missed these guys!

-Awww, crap. I want to give Chris Hardwick a hug now.