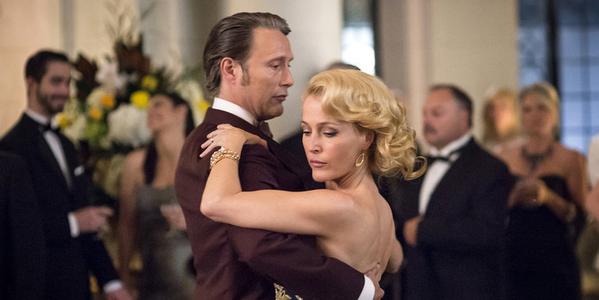 –Gillian Anderson (who returns to TV tonight on Hannibal) talked about Scully as a feminist hero in Interview’s latest podcast. She’s still so great (her fashion sense, however, continues to confound.)

–This video of David Duchovny trying to remember which role he said which line for is priceless. (Though I’m fixated on his hairline. What exactly is happening there?)

-Meanwhile, The X Files in the age of social media is going to be SO. WEIRD.

-Also, there’s talk that one of the episodes in the limited reboot will be a sequel to the creepiest XF ever: “Home.”

–Amy Schumer accepted the Trailblazer Award at Glamour UK’s Women of the Year Awards and proved that we should just let her give all the speeches from now on out. “I’m probably like 160 pounds right now and I can catch a dick whenever I want. Like, that’s the truth. It’s not a problem!”

-Last week, if you asked who would be killing it with their Duggar coverage, InTouch Weekly is not who I would have predicted. But they really are.

–Ellie Goulding says she didn’t delete her Instagram pic with Katy Perry because of Taylor Swift, but because “I looked bad in it.” Sure thing, sweetie.

–Emily Blunt is in talks to star in the adaptation of Girl On The Train? I love her, but shouldn’t it be someone a bit frumpier?

-I would never have guessed a story on Arnold Schwarzenegger’s best one liners could be such a fun read.

-Speaking of good Grantland reads, I loved this look at UnREAL and the general state of reality TV.

–Derek Hough and Kate Hudson are still hooking up.

-This is some bullshit: despite getting topping billing for Netflix’s Grace and Frankie, Lily Tomlin and Jane Fonda are getting paid the same as secondary cast members Martin Sheen and Sam Waterston. I’m glad they’re talking out about it.

-If Taylor Swift had to hike backwards to avoid the paparazzi, does it still count as hiking?

-Here’s a look at Jennifer Lopez‘s gritty new TV show, where we’re supposed to buy her as a cop.

-I don’t even know who singer Mark Kozelek is, but when a journalist tried to interview him and he told his 1900-strong audience that she wanted “to f*ck him,” she responded with this phenomenal article.

-Maybe I’m a sucker, but every Mission: Impossible Rogue Nation trailer pulls me in a little deeper.