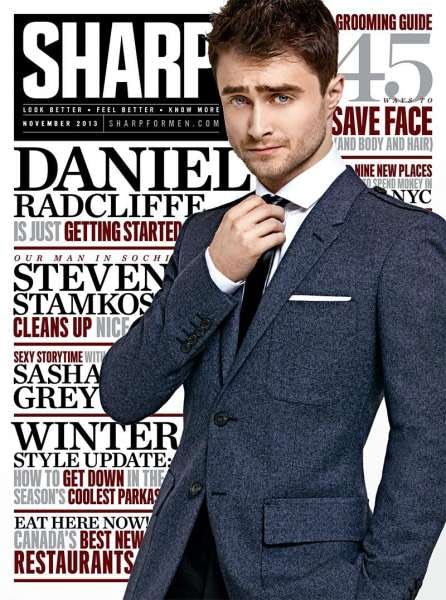 -It kind of freaks me out whenever Daniel Radcliffe looks hot on a magazine cover.  Day-um, Harry Potter!

-Also showing off a dramatic new ‘do is Jada Pinkett-Smith.

–Tom Hiddleston is on a roll this week. Here he is as Loki, arguing with some little kids.

-Speaking of Loki, the Honest Trailers guys did one for Thor, which is pretty great. I’m seeing the new one tomorrow night. Should I be worried that Natalie Portman and Idris Elba didn’t bother to show up to the premiere?

-Has Gwyneth Paltrow convinced George Clooney to turn down a Vanity Fair cover? Damn you, woman!

–Kristen Wiig and Fabrizio Moretti have reunited. I just want her to be happy and end every day with a blissed out Wilson Phillips singalong.

–Kristen Bell says she worried she wouldn’t love her daughter as much as her dogs, which is the most Kristen Bell-iest thing I’ve ever heard.

-This is a good sign: Amanda Bynes is expected to be out of rehab by Christmas.

-Jennifer Lopez took to Twitter to deny reports she had plastic surgery. She used the hashtag #fact, so we have no choice but to believe her.

-The late night shows had a field day with Rob Ford yesterday. I can just imagine what tonight’s going to be like now that he’s actually admitted the crack thing.

-A new Chvrches video has landed!

–Jimmy Kimmel did that thing again where he encouraged parents to pretend they ate all of their kids’ Halloween candy, and it was still hilarious.

-The nominations are out for the People’s Choice Awards (aka – the only award show where Maggie Smith and Lucy Hale would be nominated in the same category).

–Chris Pratt says he used to be a stripper when he was just 18, and his gigs included dancing for his grandmother’s friends.

–Hugh Jackman and director James Mangold are in talks to reunite for yet another Wolverine movie.

–Key and Peele are on fire today. Their  “sexy vampires” and “lady pleasing” skits are both going viral.

–Kim Kardashian is back to posting sexy selfies.

-I know I’ve been bashing How I Met Your Mother this season, but seriously, how bad does a show have to be for critics to start refusing to review it?

-Meanwhile, HIMYM is planning to do an entire episode in rhyme. Oh, that should fix everything.

-Moving on to actual good Monday night shows, I had no idea Sleepy Hollow was created by a 33-year-old dude from Toronto, which makes me like it even more. If you haven’t jumped in yet, last night’s was a good one to start with.

-Josh Hutcherson confirms that Jennifer Lawrence is great at everything, even kissing.

-This is promising: Happy Endings star Adam Pally (who’s now on The Mindy Project) is developing a sitcom for NBC.

–Lamar Odom‘s drug issues have been edited into this season’s Keeping Up With the Kardashians episodes, which I’m sure he’s just thrilled about.

–Ryan Adams and Bryan Adams shared birthday wishes on Twitter yesterday. How weird is it that they share a bday?

-Hannah Simone (currently on New Girl, but she’ll always be a Much VJ to us) did a Reddit AMA and it was delightful.

-A new trailer for The Hobbit: The Desolation of Smaug has landed. Everyone’s gushing over it, but I just can’t seem to bring myself to care.