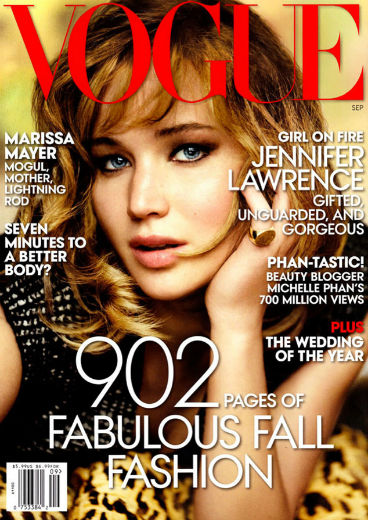 -The September issue of Vogue has landed, and with it comes a ton of bon mots from cover girl Jennifer Lawrence’s interview, including a joke about her split from Nicolas Hoult, a snippet of a conversation with her BFF, and her story about getting mean-girled by Jennifer Lopez.

-Speaking of magazine covers, Beyoncé and dead people sell them. Nicki Minaj does not.

-I apologize to your eyeballs in advance, but photos have surfaced of Justin Bieber getting butt-naked with his guitar to serenade his grandma.

-In other retina-assaulting news, Madonna now has grillz.

-The internet is buzzing about how Katy Perry’s new song sounds a lot like Sara Bareilles‘ last single, but Bareilles just wants everyone to chill.

–Nigella Lawson‘s ex-husband continues to be a raging jerkface. While doing a phone interview with the Daily Mail, he put his 18-year-old daughter on the line to read a statement about how Nigella had “abandoned her” since the split.

-Hilarious: recognizing TV’s current obsession with violent dramas, NBC has put together a cable-style promo for the new season of Parks and Recreation.

-It makes me weirdly, inexplicably happy that Pitch Perfect‘s Anna Camp and Skylar Astin are dating IRL. It almost makes up for what she wore last night.

–Miley Cyrus and Liam Hemsworth were both at last night’s Teen Choice Awards, but they didn’t walk the red carpet together and were seated separately.  Just rip the band-aid, you two!

–Kerry Washington sang a duet with Jordin Sparks backstage at the TCAs, proving there’s nothing she can’t do.

–Courteney Cox broke her wrist. No worries — she can always put a straw in Big Blue.

–Sarah Jessica Parker was supposed to play Gloria Steinem in Lovelace, but all her scenes were left on the cutting room floor.

-Congrats to George Lucas: the Star Wars creator and his wife just had a baby girl.

-I am in love with the neckline of Rachel McAdams’ dress.

–Victoria Beckham tweeted a photo of her decidedly unglamorous vacation spot in Malibu.

-For some reason, I’ve decided that doing this blog,  a daily column for MSN, restaurant reviews, and Amazing Race recaps — not to mention my full-time job — just wasn’t time-consuming enough, so I’m now doing weekly Breaking Bad columns as well. Support my insanity, won’t you?

-Speaking of Breaking Bad, it seems a whole lotta people caught up with it over the summer. Last night’s return scored it’s highest ratings ever with 5.9M viewers. It’s previous high was 2.9M.

-Oh happy day! George Clooney is doing press for The Monuments Men. (The only time I’ve ever side-eyed my Georgie was in 2010 when he said he was refusing to do press for any more films. I’m glad he’s changed his mind. I hate it when we fight…)

-The preview clips for Oprah‘s interview with Lindsay Lohan are coming fast and furious. The latest one even includes a comment from Lohan herself, who says “I’m my own worst enemy.”

-The trailer for How I Live Now has landed.  Saoirse Ronan FTW!