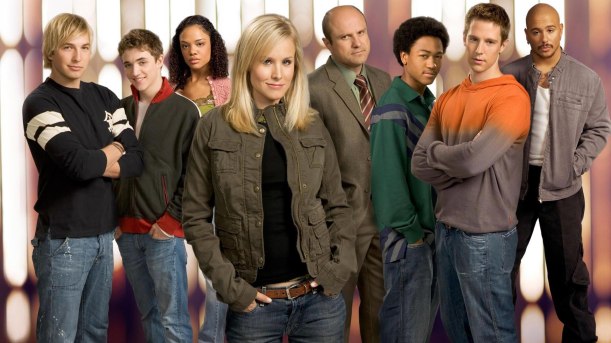 -I love and adore the fact there’s a new Kickstarter campaign to fund a Veronica Mars movie (so much so that I spent a stupid amount of time on Twitter today promoting/defending it). Yeah, it would be great if Hollywood came up with new concepts instead of just rehashing old ones, but I think it’s become abundantly clear that’s not really gonna happen. Plus, this particular old concept is still so good! (Just watch this video the cast made in case you’re wondering if they still have chemistry.) And I love what this could mean for the industry; fan passion trumps Hollywood execs who are slaves to formula (Mark Harris makes a similar call-to-arms in this week’s EW). The Veronica Mars crew is asking for $2 million, which A) means they’re doing this because they want to, not because they think it’s going to make them rich, and B) is way less than what it costs to make 2 hours of scripted network television today. Last I’d checked, they’d already passed $1 million, which means this is happening. Don’t think of it as a donation; think of it as a preorder!

-Meanwhile, Vulture has already compiled a list of 11 things they want to see in the movie.

–Miley Cyrus and Liam Hemsworth have reportedly broken up, which is not surprising. What is surprising is that she’s bearing the brunt of the blame in the media because she supposedly “likes to party really hard.” Are you kidding me?!

-I dug the barbershop quartet retrospective of Justin Timberlake’s greatest hits on Fallon last night, but would it have killed JT to ask his former N’Sync bandmates to help out with the harmonizing?

-I kind of love that Olivia Wilde read hate Tweets from Beliebers on Leno last night.

-In other delightful late night talk show appearance news, Nina Dobrev was a total charmbomb on Conan, demonstrating her fighting skills and talking about her mother’s sex scene advice.

–Prince William and Kate Middleton are calling the royal heir “Our Little Grape.” Uh oh. This is exactly how it started with Drew Barrymore, and she ended up calling her daughter Olive.

-Speaking of Drew, she’s reuniting with Adam Sandler for a romcom. (Hopefully Billy Idol is invited too.)

–Lil Kim and Wendy Williams are being nasty to each other on Twitter.

–Ashley Greene has rented a studio apartment across from her place — just for her clothes. On the plus side, there’s now something sort of vaguely interesting about Ashley Green.

-It’s a Mad Mentastic day. There’s a new promo video and a bunch of new photos to speculate wildly about. As long as the new season comes somewhere close to matching the perfection of this scene, I’m in.

-I like Taylor Swift‘s video for “22“, even if it is set in a fantasy Instagram hipster land.

-A new Amy Poehler-produced show just got a ten-episode order from Comedy Central. It’s called Broad City and it’s about, um, broads in the city.

-Speaking of Amy, she shows up at the end of this Somebody Up There Loves Me promo (which also features a dancing Adam Scott).

-Who the hell wants to dress like John Malkovich? Clearly someone, ’cause he’s partnering with Yoox for a capsule collection.

–Gwyneth Paltrow is getting a lot of crap for her new cookbook and for admitting she has a strict no-carbs rule with her kids. Look, I’m no fan of GP (as evidenced by my Tumblr blog dedicated to how ridiculous she is), but seriously — how can anyone be surprised by her antics at this point?

-I love that Maggie Q has been cast as Tori in Divergent!

-The Proenza Schouler show was one of my faves from NYFW, and Kirsten Dunst just wore one of its best looks.

–Spring Breakers continues to rake in the rave reviews.

–Jude Law is dating a 25-year-old model. Bummer. I thought he was still dating the woman who plays Alice on Luther.

-The new trailer for NBC’s Hannibal is creepy as hell.

-I wonder if this blind item is in any way connected to the weird tweets Kristen Stewart‘s mother sends out?

-The Kick-Ass 2 trailer is great. It almost makes me feel bad for that time I got all snippy with a production assistant who wouldn’t let me cross the road because they were shooting a scene for it. Almost.