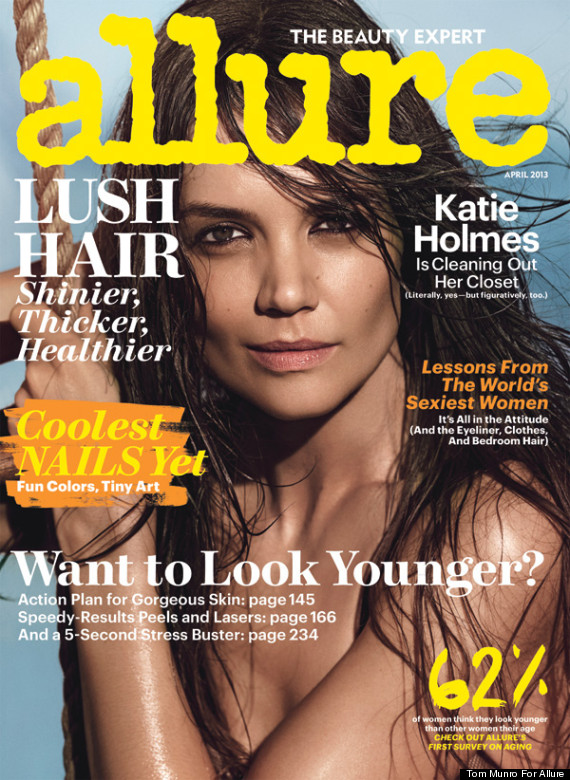 –Katie Holmes covers the new issue of Allure, in which she says she’s “open” to having more children and she’d consider becoming a lawyer. Can you imagine being charged for a serious crime and having Joey Potter stride into the courtroom to defend you? *shudder*

–Shailene Woodley has been offered lead role for The Fault in Our Stars. I really, really wanted it to go to Mae Whitman, but this could be worse (especially since Woodley is getting crazy raves for the SXSW film The Spectacular Now).

-Meanwhile, there are a whole lotta YA novel adaptations hitting the big screen soon.

-I would hate to be the keeper of Selena Gomez‘s Twitter feed after she mildly mocked Justin Bieber on last night’s Letterman.

-I also wouldn’t want to be dealing with Keyshia Cole‘s Twitter after she slammed Beyonce’s new song.

-This story about Beth Ditto getting arrested at a bar makes me sad (especially her dick-waving “Google me, bitches!” antics). Kinda assumed she was cooler than that.

-Good news: Lil Wayne has been released from an L.A. hospital.

-I always pooh-poohed those rumours of Bradley Cooper dating Jennifer Lawrence because she’s just way too young for him — and now I find out that he’s dating a model 18 years his junior! I never understand how relationships like that work. Like, how does a 38-year-old man introduce a 20-year-old girl to his friends?

-The Joss Stone murder plot trial has begun, and it’s already grizzly. The suspects allegedly planned to decapitate her and dump her body in a river. She took the stand and revealed that she had no idea about the plot until the arrests.

-In news that is sure to warm even the coldest heart, Ian McKellen is going to officiate Patrick Stewart‘s upcoming nuptials.

-I was really down on the internet yesterday after reading all the terrible, women-hating reactions to the Steubenville rape trial. Thank god a new batch of photos of Tom Hardy playing with puppies landed!

-Sad news: Henry Bromell, the executive producer of Homeland (and Homicide: Life on the Street, Carnivale and a bunch of other shows), died suddenly after suffering a heart attack.

-Is Josh Duhamel auditioning for a There’s Something About Mary sequel? What’s up with that hair?

–Miley Cyrus has been having a rough month, so it’s probably a good time to reflect on how remarkable it is that she’s not even more screwed up by now.

-I never thought I’d say this, but the more I read about Gwyneth Paltrow’s new cookbook, the more I kind of agree her. It probably is a good idea to take short vacations from processed crap every once in a while. Sounds a heck of a lot healthier than that 2-day fasting diet that’s sweeping Britain right now…

–Robert Pattinson shaved his head, in case you care.

-I really liked this article on how Girls changed the game not just for TV, but also for indie film. No other show makes me vacillate so wildly between love and hate (which kind of makes me love it…even when I hate it).

–Justin Timberlake needs to go away for a while. That means not playing Daddy Warbucks in the Annie remake.

-It pains me to say it, but I agree with this article on Parks and Recreation‘s “Leslie Knope problem.”

–Rainn Wilson posted a photo of the sign-in sheet from the first day of The Office‘s casting session which revealed that Adam Scott auditioned for Jim, Matt Besser tried out for Dwight, and Mary Lynn Rajskub read for Pam. I’d watch all of that!