–Justin Bieber appears to be fully healed since collapsing yesterday in London. First he Instagrammed a photo from his hospital bed (shirtless, natch!), and now he’s back to fighting with photogs. These photos, which are supposed to show the confrontation but actually look like his bodyguard is holding him like a baby, made my life.

-And for those of you keeping track at home, yes, this was Justin‘s worst week ever.

-Just like clockwork, here come the reports that George Clooney and Stacy Keibler are headed for a breakup. Of course they are; the Oscars are over.

-It turns out that Kate Middleton didn’t reveal the sex of her baby after all.

–Community’s fifth season is pretty much a lock, judging by their surging ratings (and the fact that NBC has no idea what they’re doing.)

–Selena Gomez told a sweet story about how when she was an adorable little kidlet, her dad used to take her to Hooters to pick up waitresses.

–Drew Barrymore, Cameron Diaz and Reese Witherspoon‘s Mexican vacation included “tons of fitness classes” and something called Bikini Boot Camp. As everyone who’s ever been to Mexico knows, they’re doing it wrong.

–Jessica Biel may have just accomplished what Kim Kardashian will never do: get Beyonce to like her.

-I can’t wait until the new EW hits my mailbox! Michael Douglas and Matt Damon are fabbing it up as Liberace and his lover on the cover.

-Hal Johnson and Joanne Mcleod of “Body Break” fame auditioned for The Amazing Race Canada. Somebody please make this happen!

-Despite reports that Elisabeth Hasselback has been shown the door on The View, her reps are denying any imminent departure.

-I’m digging the SXSW trailer for I Give It A Year,  a comedy about the first year of
marriage starring Rose Byrne, Anna Faris and Simon Baker.

-I really liked this article with Chris Hardwick discussing his favourite episodes of his podcast.

–Danielle Fishel (aka – Boy Meets World‘s Topanga) is wearing a whole lotta nothing on the cover of Maxim.

–Who gave Alexander Skarsgård a black eye? Does he need me to hurt anyone for him?

-The first trailer for The Hangover III has arrived.

-What exactly is Eva Longoria doing in this commercial?!

–Christina Hendricks is going to star in a movie about Joan Didion. Happy International Women’s Day!

-The trailer for Sofia Coppola‘s The Bling Ring, which stars Emma Watson as one of the privileged teens who broke into celebrity homes, has arrived. 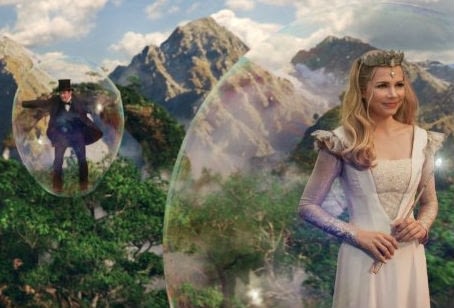 We’re off to see the wizard…except he’s not exactly the wizard yet. In Sam Raimi’s prequel to the beloved classic The Wizard of Oz, we’re introduced to Oscar Diggs (Oz for short), a travelling magician whose daily routine of conning audiences and breaking hearts gets interrupted when he’s swept up in a tornado and transported to the fantastical world of Oz. There he meets munchkins, flying monkeys and witches (some good, some wicked). But despite the familiar story, there’s nothing in this update that feels like it’s cheapening the memory of the 1939 original – possibly because copyright issues prohibited references of ruby slippers, cowardly lions and hollow-hearted tin men.

The film is a fun (if forgettable) family-friendly romp which tracks Oz’s transformation from a selfish con man to the man behind the curtain. I’m not a huge fan of 3D but Raimi manages to make the awkward glasses and overpriced ticket worth it with a couple of spectacular sequences, most notably the black-and-white opening in turn-of-the-century Kansas, and Oz’s first encounter with China Girl (voiced by Joey King), a living porcelain doll whose entire village has been smashed to pieces by evil forces. The candy-coated world of the film was so engrossing, I didn’t even experience the distracted twitch I usually get when a movie creeps past the two-hour mark.

The trio of leading ladies shine, with Mila Kunis playing the trusting but volatile Theodora, Rachel Weisz putting her British ice queen schtick to good use as the scheming Evanora, and Michelle Williams exuding dreamy serenity as the glowing Glinda the Good. (Unfortunately, one of these ladies transforms into the Wicked Witch and spends the last half of the movie unrecognizable beneath layers of prosthetics.)

There’s just one thing that keeps this good movie from becoming a great one – and it’s a biggie: the leading man.

I spent the first half of the film trying to mentally recast it, since it became immediately apparent that James Franco was woefully out of his depth. It’s not that I don’t think he can act; I found him mesmerizing in 127 Hours and Howl, and he’s getting raves for his gonzo performance in Spring Breakers. It’s just that the character of Oz, the suave trickster who’s destined to become Emerald City’s great wizard, is supposed to be a charming, charismatic con artist who leaves a trail of heartbroken women in his wake. And Franco just can’t sell that.

Both Robert Downey Jr. and Johnny Depp were originally considered for the role, and it’s easy to imagine either one embodying the cocky, irresistible lothario the film deserves. Or how about Colin Farrell or Idris Elba, who both have swagger to spare?  Bradley Cooper, Leonardo DiCaprio and Ryan Reynolds all made their bones playing slick hustlers. I could even picture Joel McHale, Nathan Fillion or Ian Somerhalder stepping in (all have made successful TV careers playing mischievous, can’t-help-but-love-‘em rakes). But not for one second did I believe that the joyless Franco could cast not one but two of the film’s leading ladies under his spell with his flat delivery, squinty eyes and gummy smile. He exudes smugness, and the lingering feeling that the entire proceedings are somehow beneath him taints the whole movie.