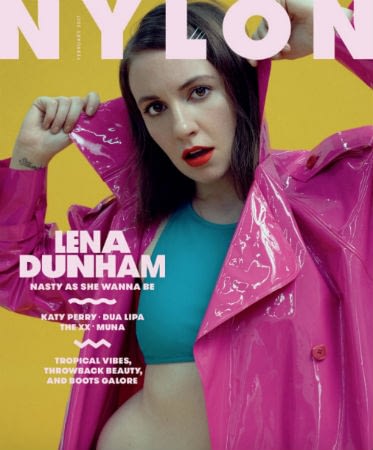 -I really like the styling on Lena Dunham’s Nylon cover. The story is, well, very Lena-y. At least she owns up to Girls’ diversity issues, saying “I wouldn’t do another show that starred four white girls.”

-Speaking of good magazine covers, Natalie Portman tells this month’s Marie Claire UK that Ashton Kutcher was paid three times more than her for No Strings Attached.  (I have a weird affection for that movie, mostly because of this scene.)

–Victoria Beckham penned a letter to her 18-year-old self, saying “I should probably say, don’t mess with your boobs. All those years I denied it — stupid. A sign of insecurity. Just celebrate what you’ve got.”

-The Brad Pitt/Kate Hudson stories are a REACH, y’all.

-People magazine is going all in with their reporting on Kim and Kanye’s marriage troubles.

–Andrew Garfield calls himself Emma Stone’s “biggest fan,” continuing to fuel our hope that this awards season somehow brings them together.

-Prison Break is back on April 4 and the trailer has me surprisingly stoked.

-Speaking of TV revivals, looks like The X Files is coming back. Schedules permitting, they’re hoping for more than 6 episodes but less than 22.

-“It doesn’t have to look good, it just has to autoplay on Facebook.”  Billy Eichner clearly understands how viral videos work.

–Nicole Kidman should maybe not say these things out loud.

–Michelle Obama surprising people on The Tonight Show was lovely. She also took on Dave Chapelle and Jerry Seinfeld in Catchphrase.

–Michael Jackson’s daughter criticized the bizarre Urban Myths trailer. “I’m so incredibly offended by it.” We all are, kid. We all are.

-More proof that TV is becoming better than movies: the Coen brothers will write and direct their first TV series.

-Good news for Donald Glover: he’s inked an overall deal with FX. Bad news for us: this means the next season of Atlanta is delayed until 2018.

–Ben Affleck and Leonardo DiCaprio have a cute little book-swapping thing going on.

-According to critics, HBO’s highly meme-able new drama The Young Pope is not nearly as fun as the tweets about it. Sad.

-I like this piece on why the Oscars won’t detonate the reductive La La Land vs. Moonlight narrative.

–Riley Keough and Jena Malone are BFFs in the trailer for So Yong Kim’s Lovesong.

-Here’s the trailer for the movie version of CHiPs starring Dax Shepard and Michael Pena. Out of all the IP to reboot, I don’t get why they chose this.

Pink Kills it at the American Music Awards