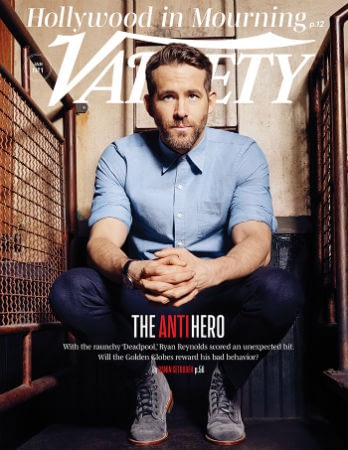 -This week’s Variety cover story is all about how Deadpool saved Ryan Reynolds career. It absolutely did — but you gotta wonder how many better actors will never get as many chances as he did.

–Brad Pitt only had one visit with his kids over Christmas, says a source.

–Nicki Minaj got ahead of the gossip cycle and confirmed her split from Meek Mill on Twitter.

-This is terrifying: Jennifer Lopez has been granted a temporary restraining order against an alleged stalker.

-Only five days into the new year and already there’s a George Clooney baby rumour. And this one features twins!

-It turns out Drew Barrymore‘s family sitcom on Netflix has secretly been a zombie show all along. But it costars Timothy Olyphant and Nathan Fillion, and it’s from the guy who made Better Off Ted, so I’m down.

–Meryl Streep showed up today to help Viola Davis get her star on the Hollywood Walk of Fame, and her speech was lovely.

–Lady Gaga and Katy Perry have been dragged into the legal battle between Kesha and Dr. Luke.

–Alexis Bledel is in Hulu’s The Handmaid’s Tale (a fact that critics were specifically embargoed from revealing until now).

-I feel really bad for Janina Gavankar, who talks about the about the tricky task of joining Sleepy Hollow after Nicole Beharie’s exit. She’s an actress I like a lot, but there’s no way in hell I’m watching that show ever again.

-I really liked this take on how Emma Stone‘s La La Land performance transcends her character’s writing. I like Damien Chazelle but I wish he’d drop the “artistic male genuis’ career threatened by love interest” trope. Whiplash had the same issue.

-Not sure how I feel about this: The CW is developing a new Charmed reboot from the team behind Jane The Virgin. It’s a reimagining set in 1976. (Holly Marie Combs responded classily on Twitter.)

-The week after the holiday break is always tough. Here’s a video of Tom Hardy reading a bedtime story to a dog to pull you through.

-Remember when Hugh Jackman was adamant Logan was going to be his last movie as Wolverine? Yeah, maybe not.

-This story about past Miss Golden Globes has lots of cute tidbits, like Mavis Spencer talking about how one of The Hangover actors fractured her foot during the 2010 ceremony, and Greer Grammer telling Prince which way to exit the stage. “He just gave me this look like, ‘Who are you?’ and exited in the opposite direction.”

-Teen Vogue is proving themselves yet again, this time by exposing the Coachella owner’s support of anti-gay groups.

-Here’s the new trailer for I Am Not Your Negro, a doc that got a lot of buzz at TIFF.

–Michael Fassbender tries to escape his family’s criminal roots in the Trespass Against Us trailer.