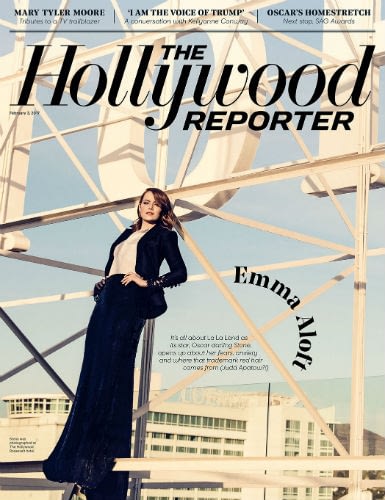 –Emma Stone managed to out-awkward Jennifer Lawrence during her adorable SAG speech last night. She’s also on the new THR cover, talking about her debilitating shyness and her Oscar campaigning: “I’m not complaining because I love this film — it’s fun to talk about it — but I’ve been doing interviews about this movie for almost six months.”And if you need yet another reason to lover her, she also revealed that her two best friends are Canadian. (“One’s from Prince Edward Island and the other from Scarborough.”)

-There weren’t too many showstopper dresses last night, but I dug Thandie Newton’s and Michelle Williams’.

-One of my favourite things about last night’s SAG Awards (besides the supercharged speeches) was watching all the megastars gush over the Stranger Things kids.

-Speaking of the speeches, everyone focused on Winona Ryder‘s (admittedly hilarious) reaction faces, but that entire speech was a barn-burner.

-So Kevin Spacey was once again accompanied to an award show by Evan from pop duo Evan & Jaron.

-This weekend’s SAGs and PGAs gave big Oscar boosts to Hidden Figures and La La Land (but not so much for Moonlight and Manchester by the Sea).

-Goodness. Now Mischa Barton is saying she was hospitalized last week because someone slipped her GHB at her birthday party.

–Kal Penn responded to a racist troll by raising over a 1/2 million dollars for refugees.

-Congrats to Evan Rachel Wood, who’s engaged to her bandmate.

-Nice: Gina Rodriguez just inked an overall deal with CBS. She deserves to be a giant star.

–Emma Watson and Miles Teller are reportedly pissed they didn’t do La La Land, as was originally planned.

-Just in case you were wondering, Viggo Mortensen smells like tea, wisdom, beef jerky, and berries.

–Selena Gomez made her relationship with The Weeknd Instagram official by posting photos from their Italian vacation.

-This got a little lost in the weekend shuffle but I really urge you to read this account of the conversation at a lunch celebrating women in film at Sundance. Salma Hayek is so incredibly dismissive of Jessica Williams and the experiences of black women. This is white feminism at its worst. Williams was incredibly composed (though she later explained on Twitter “the ‘composure’ literally was just me shutting down after someone called me an angry black woman.”)

–Ruth Negga shows us how to make an Irish coffee. I like the Cougar Town pour she’s got going on…

–Timothy Olyphant is dismissing rumours that he auditioned to play Negan on The Walking Dead.

–Samantha Bee is planning to host her own correspondents’ dinner on the same night as the White House one. Guess which one I’d rather watch?

-Say what you will about Nicolas Cage, but this was pretty swell of him.

-Congrats to Felicia Day, who welcomed a daughter she adorably named Calliope Maeve.

–Kim Cattrall sounds pretty skeptical about all those Sex and the City 3 movie rumours.

-Fork yeah! The Good Place has been renewed for a 13-episode second season! It’s ratings aren’t stellar but the finale did such a good job of setting up another season that it would be a shame if it wasn’t renewed.

-Everyone at Sundance is raving about Call Me By Your Name. Here’s the first clip (Armie Hammer‘s shorts have already sold me).

–Dakota Fanning takes on a dangerous preacher in the Brimstone trailer.