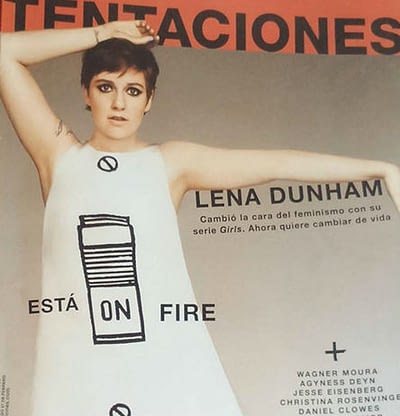 –Lena Dunham is not happy with her photo on the cover of Tentaciones, saying “this is NOT what my body has ever looked like or will ever look like- the magazine has done more than the average photoshop.” The mag claims they didn’t change anything.

–Ben Affleck and Jennifer Garner were at the same Oscar party and somehow the universe didn’t implode.

–Jen enjoyed a much less awkward reunion with her Spy Daddy.

-Like the rest of civilization, Jennifer Lopez is sending a hard side-eye at Ben Affleck’s new back tattoo.

-JLo also says she’s not feuding with Mariah Carey despite a decade worth of rumours about it. Do you remember interviews like this, when she used to slam everyone? God, the last few paragraphs on that page still give me life.

–Kate Winslet isn’t actually pregnant. The only reason women were touching her at the Oscars is because they couldn’t believe she actually chose to wear that garbage bag material of her own free will. (“Keep smiling. I’m going to pat your stomach now. If you need help, blink twice!”)

-I’m gonna need someone to explain to my why Courteney Cox is in this picture, kthanxbye.

–Sly Stallone‘s brother has apologized for that Twitter rant after his bro lost.

–Mellie from Scandal is dating the Jeremy from The Mindy Project IRL. Weird but also awesome.

-In case you missed our Oscars fashion recap, it’s here and it’s spectacular!

–Chris Martin will get around to Gwyneth Paltrow’s divorce papers soon. Maybe. If he feels like it. We’ll see.

-If you haven’t watched John Oliver’s takedown of Donald Trump yet, it’s worth 21 minutes of your time.

–Tom Hiddleson is ready to pee on you if you get stung by a jellyfish, science be damned!

–Spike Jonze convinced Stephen Colbert to try a new artsy opening — with a cameo by Grover.